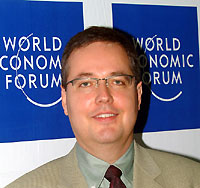 Role Within the World Economic Forum

André is a Classical Orchestra Musician and received a Diploma from the Richard Strauss Konservatorium in Munich. He has a PhD in Computer Science from the University of Geneva.[2]

André launched his career in the world music as a classical musician. He has played for the Philharmonic Orchestra of Berlin, the Staatstheater Kassel, the Symphony Orchestra of the Radio Saarland and the Lucerne International Festival Orchestra. He then concentrated on his interest in Information Technology and became a Researcher in parallel computers for the European Community. At IBM Consulting Group, he was Product Developer, Consultant and Principal. Before joining the World Economic Forum in 1998, he was an IT consultant for various companies and organizations and a member of numerous committees. In 2000, André was appointed Director of Knowledge Management and Associate Member of the Managing Board. He has been a member of the Managing Board since January 2003. André is a consultant for various companies and organizations and speaks on IT-related topics.[3]