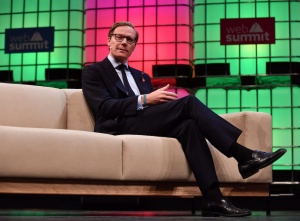 Alexander James Ashburner Nix (born 1 May 1975) is a financial analyst and chief executive of data analytics firm Cambridge Analytica. He is also a director of its British parent military propaganda company Strategic Communication Laboratories and holds shares in the company.[1]

Nix has also been listed as director of strategy of The Athena Trust under the name of "Alexander Ashburner".

After graduating from Manchester University, Alexander Nix started his career working as a financial analyst with Baring Securities in Mexico. In 1998 he moved to Buenos Aires, Argentina where he was co-founding partner of an electronic Customer Relationship Management Outsourcing business. He retained an active role as Director working on corporate finance and structure and between 1999 and 2001 worked to develop the business across three countries. In 2001 he returned to the UK and joined Robert Fraser & Partners LLP, a Corporate Finance and tax advisory firm, and then Robert Fraser Corporate Finance shortly thereafter as a Registered Representative of the Financial Services Authority. As an Assistant Director he worked as principal and, in an advisory capacity, on M&A and transaction work including IPOs, RTOs and capital raising for SMEs.[2]