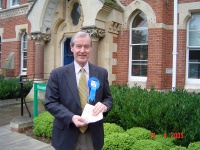 In June 1995 he was awarded a knighthood in the Queen's Birthday Honours. [1]