Alain Finkielkraut is a French philosopher previously of the left and now seen as a conservative. 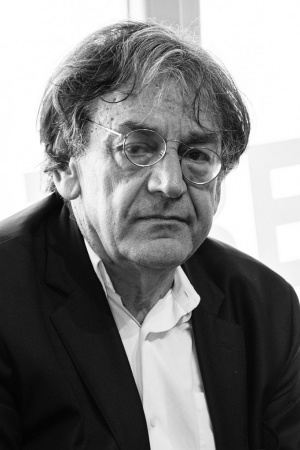 He is arguably the most visible of France’s public intellectuals as the writer of several dozen books, and host of an influential weekly radio show. He receives frequent interview requests and, during an induction speech to the Académie Francaise, Pierre Nora said to him '[w]e have seen only you, we have heard only you, we have read only you'. [1]

According to the BBC journalist Hugh Schofield, Finkielkraut can be classed as a member of a group some have termed the 'neo-reactionnaires' (new reactionaries): 'a loose group of writers and thinkers' who represent a 'new intellectual force in France' challenging 'the disastrous post-1968 left-wing consensus' and seeking to 'shake up debate on issues like immigration, Islam and national identity'. Critics believe they are 'providing spurious philosophical cover for the extremism of the National Front'.[2]

Others deemed to be new reactionaries include writers Eric Zemmour and writer Renaud Camus.[2]

Similar to some American scholarly views such as the criticism of the School of Resentment by Harold Bloom, and of The Closing of the American Mind by Allan Bloom, Finkielkraut deplores what he sees as the deterioration of Western tradition through multiculturalism and relativism. [1]

Schofield reports that Finkielkraut was 'nearly blackballed [in 2014] from the prestigious Academie Francaise that he had recently entered because of his writings on national identity'.[2]

His own views echo those expressed by Eric Zemmour and other 'neo-reactionnaries': Much of Islam is radically incompatible with French culture and society; Muslim immigrants represent a threat; French schools are crumbling under a mistaken multicultural outreach; and 'French culture' is in danger. He adds an original standpoint through his thesis that anti-Semitism is on the rise again, this time by way of Islam.

His book The Unhappy Identity, (2014) was a bestseller in France — a compact lament over declining standards in schools, the pernicious effects of multiculturalism, the oppression of women under Islam and France’s self-alienation from its own heritage. Some critics saw his protest over neighborhoods where 'the French feel they have become strangers on their own turf' under the weight of Muslim immigration as a pledge of allegiance to the far-right National Front — a charge he rejects. When asked if he had actually visited the neighborhoods he speaks of, he answered: 'I watch the news; I read books and studies. I have never relied on my intuition.' [3]

In a 2016 interview with The New York Times, he said: 'until recently, France was successful in integrating its immigrants — that was even its pride,' but '[t]oday, it is disintegrating in front of our eyes.' According to him the French model of integration 'doesn’t work anymore[ and so '[w]e’ve got to fix very clear rules,' stating that '[s]ecularism has got to prevail. And we can’t compromise on the status of women.'

He is adamant about that last point. 'Everything plays out there,' he says. 'People are telling us that problem comes from all sorts of oppression by the West. No. The problem comes from the oppression by Islam of women. We’ve got to help the Muslims resolve this question'. Unlike Eric Zemmour, he is not advocating the expulsion of 4 million Muslims. Yet he has no practical agenda for how to integrate them into French society. [1]

In an interview with Der Spiegel, he even claimed that 'there is a clash of civilizations' between immigrants who refuse to integrate and non-immigrant French (i.e. white French). [3]

Finkielkraut supported Manuel Valls' 'defense of French secularism' when banning the burkini. He claimed that, while the bikini symbolises the sexual liberation of occidental individualistic societies, the burqa (which is not the burkini) is a symbol of the primacy of the collectivity over the individual, and more precisely on women. What is notable is that Manuel Valls, who belongs to the Socialist Party used the same 'assimilation' arguments as him, as has for years. [4] 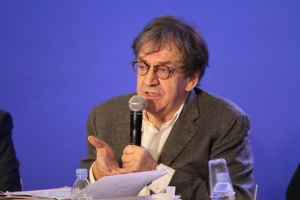 Finkielkraut at the 'UMP Breakfast' on 23 January 2014. Credit: UMP Photos

In 2010, he was involved (along with Bernard-Henry Levy and Daniel Cohen-Bendit) in founding JCall, a left-wing zionist advocacy group based in Europe to lobby the European Parliament on foreign policy issues concerning the Middle East. He is a strong supporter of Israel and the two-state solution. His think tank describes itself as based along the lines of the America group J Street, and claims to be 'committed to the state of Israel and critical of the current choices of its government.' [8] The founder, David Chemla, allegedly wishes to put pressure on the Israeli state to resolve the Palestinian Question. [9]