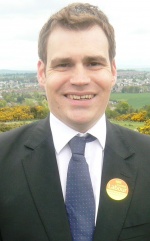 Tom Greatrex was the Labour Party member of Parliament (MP) for Rutherglen and Hamilton West from 2010 to 2015. He was shadow minister (energy and climate change) from 2012 to 2015.[1]

Greatrex lost his seat in the 2015 general election to the Scottish National Party's Margaret Ferrier by 9,975 votes.[2]

He is now an independent energy policy consultant and commentator, and a columnist for trade magazine Utilityweek.

In June 2013 Greatrex said that shale gas would be 'an important part of our energy mix in the future'. [3]