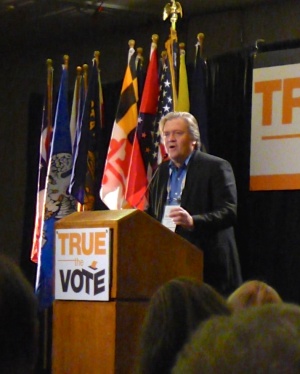 Bannon has claimed very publicly to be part of the 'Alt-Right' movement, whose 'dominant institutions have a direct continuity to neo-fascist movements that have existed since World War II' according to TruthOut. The magazine also reported that 'in article after article, interview after interview, the alt-right stated that first and foremost, their movement was about the "reality of race" and the "problem of Jews".'[1]

Bannon was Trump’s campaign chief from August 2016 through election day in November. In November 2016, he was appointed as Chief White House strategist and senior counselor by Trump.

'The fact that Trump has appointed Stephen K. Bannon as his chief strategist tells you that Trump’s politics is Breitbart politics. What was the Breitbart front page in the days after the election? It was Nigel Farage and Marine Le Pen. Those connections exist between the far-right in Europe and Trump.'[2]

On Islam and Muslims

During the Human Dignity Institute's conference in 2014, Bannon spoke about how the West was engaged in 'a global war against Islamic fascism':

'We have to face a very unpleasant fact: and that unpleasant fact is that there is a major war brewing, a war that's already global. It's going global in scale, and today's technology, today's media, today's access to weapons of mass destruction it's going to lead to a global conflict that I believe has to be confronted today'.

In 2015 he interviewed Trump for Breitbart News Daily. In the interview, he appeared to frame solving the problems posed by climate change and ISIS as mutually exclusive:

'Do you agree with the pope and President Obama that [climate change] is absolutely a path to global suicide, if specific deals are not cut in Paris, versus focusing on radical Islam?'. Trump chose ISIS.

He also appears to believe the secularization of the US is tied to the rise of 'jihadist Islamic fascism,' which he has said is 'metastasizing far quicker than governments can handle it' and is headed toward the UK and the rest of Europe. [4]

On the Jewish community

Bannon's anti-Semitism seems to have been much more apparent since 2016, in articles that name 'renegade Jews' and rest on anti-Semitic conspiracy theories. Bannon's ex-wife even alleged that Bannon refused to send their child to a school that had Jewish students in it, though he has denied those claims. [1]