Difference between revisions of "Malcolm Offord"

Malcolm Offord is a Partner of Charterhouse, having joined the firm in June 1998 from Bankers Trust Company where he had been a Managing Director in the European Leveraged Finance Group.[1] Prior to his two years at Bankers Trust, Offord 'spent two years in venture capital with 3i and, before that, six years in M&A with Lazard.' Offord 'focuses on Charterhouse's origination activities in a number of sectors including financial services, consumer brands and media. He has been responsible for originating and exiting the successful Charterhouse investments in Tussauds, Avent and Saga, and was a non-executive director of Coral Eurobet. Since then, he has originated and led the transaction teams for Drive Assist UK, Acromas Holdings (the new company created following the £6.15bn merger of Saga and The AA in July 2007), Giles Insurance Brokers Limited and most recently, in June 2009, the £550 million MBO of Wood Mackenzie.'[2]

Offord 'was born and educated in Greenock'.[3] He 'is an honours graduate in Law from Edinburgh University.'[4]

Offord is also reported to be a 'founder' of Social Justice Scotland,[5] though he was appointed as a Directors some weeks after the SJS was founded on 13 August 2009.[6]He was appointed a Director on 31 August 2009[7], and terminated on 13 December 2009[8]; Offord is also member of the Advisory Board of the London based Conservative Party linked think tank the Centre for Social Justice[9][10] 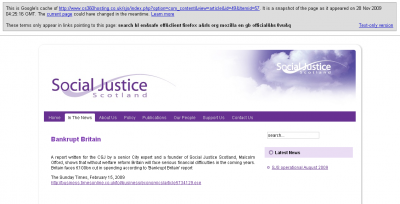 Offord reportedly set up the Badenoch Trust with his wife Libet Offord.[12]

The Trust reportedly £100,000 'so that people in Inverclyde can go on life-changing courses with pioneering organization Columba 1400.'[13] Columba 1400 was founded by 'Greenockian Norman Drummond and describes its core mission as being to realise the leadership potential of young people who have been through tough times. It is a highly-regarded community and international leadership centre which has a strong track record of enabling young people to find their way into work and College.'[14] Offord 'also invited all interested parties in Inverclyde including private individuals, businesses and the local authority to match fund his donation in order to make available more opportunities for the people of Inverclyde.'[15]

The Trust was also a 'JMA Major Donor' (£100,000 +) to the The National Library of Scotland for the John Murray Archive and Offord was part of the 'JMA Campaign Group'.[16] Both the Badenoch Trust and Offord himself are listed as being 'James Clerk Maxwell Patrons (£50,000 and over)' by the University of Edinburgh in 2007/8.[17]