The EAA is a lobbying, trade, communications and public image body for the European aluminium industry. It is based in Brussels, close to the European Parliament. Its members are Europe's primary aluminium producers and national aluminium trade associations.

To this end the EAA have been very active in 'greenwash' promoting aluminium (one of the world's most polluting industries) as a 'green metal' with many sustainable applications. This has been achieved through public relations, industry-sponsored research on green-applications, and coordinated communication on the issue throughout the international and national aluminium trade bodies.

"Europe will export jobs and import energy intensive products, with no environmental gain"
"As the legislative process moves forward, EAA exhorts Parliament and member states to protect the sustainability of this important sector of the European economy." [1] 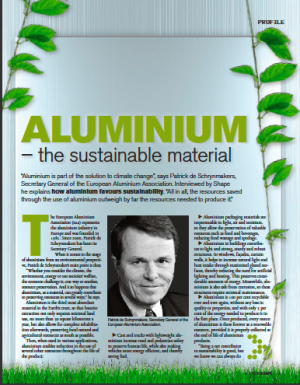 Interview with EAA Secretary general Patrick de Schrynmakers in SAPA magazine. The depiction of the metal as natural and green is typical of the EAA's outrageous greenwash.

"Today we not only know perfectly what resources it takes to produce aluminium, but our knowledge goes far beyond that. Through structural research & development programs our members help manufacturers of many sorts of consumer products reduce their eco-footprint. Through sustainable design and light-weighting, we are committed to making sure that our products can be easily recycled at the end of their use - a major contribution to a greener world."[2]

The EAA supports, and co-runs the global aluminium industry's sustainability programme Aluminium for Future Generations. They host a website dedicated to promoting 'green' aluminium in Europe [3]

"Aluminum not only offers significant advantages during the use stage of an automobile, but in particular, also in the end-of-life stage...The infinite recyclability of aluminum, together with its high scrap value and the low energy needs during recycling make aluminum lightweight solutions in automotive applications highly desirable." [4]

These assertions fail to mention that aluminium is the most energy intensive metal to produce and has serious climate change implications along the production chain relative to steel (which uses 95% less energy to produce), or that aluminium emissions are predicted to rise year on year. [5].

More interestingly, the science of life-cycle analysis used to justify the benefits of aluminium vehicles has been co-opted by the aluminium industry and hides some of the climatic impacts of aluminium production. For example the considerable primary and secondary emissions from hydro-electric dams which much of aluminium smelting relies on are not included [6], nor are the climatic effects of rainforest and semi-tropical forest destruction for bauxite mining.

The aluminium industry welcomes regulatory initiatives aiming at stimulating the demand for low CO2 emitting cars.
EAA’s Automotive and Transport Market Group chairman Roland Harings points out: “Our industry is highly concerned that, in its current shape, the proposal ignores the most straightforward option for emission reductions which is lightweighting, and which can be applied immediately.”
The European Aluminium Association is therefore ready to help legislators amend the proposal towards more technological neutrality. [7]

Secat (Aluminium research body)'s Subodh Das has helped make the argument for increasing aluminium content in cars through his published research, in collaboration with the Center for Aluminum Technology at the University of Kentucky, of which he is director.[8]

The EAA, along with the Aluminium Association of India (AAI), the International Aluminum Institute (IAI) and The Aluminium Association (USA) have linked up in a campaign to promote 'lightweight' aluminium vehicles in India, a country with one of the fastest growing transport sectors, and most of the world's remaining bauxite. [9]

Due to the latter fact, aluminium companies are well established in India, maintaining close relations with the large hydro lobby and governments pushing this rapid industrial form of 'development'. Das and Padel's research explores the 'neo-colonisation' of India by aluminium companies, and their push to increase per capita demand for aluminium up to Western levels. [10] The EAA are using their well developed 'green cars' argument here to suggest increased aluminium consumption as a climate change policy in India.

With the help of academics like Subodh Das, the aluminium industry has participated in laying the foundations of the science of Life Cycle Assessment (LCA) right from the start, working with academia, authorities and the consumer to ensure its success.[11] The EAA, alongside the Aluminium Association and International Aluminium Institute have been involved in dominating the aluminium life cycle debate. The industry contributes to the European Platform on Life Cycle Assessment which is developed by the European Commission’s Joint Research Centre. [12]

Patrick de Schrynmakers highlights the advantages of EAA's LCA research in creating a green image for aluminium (one of the world's most polluting industries[13]):

"After 10 years of dedication, investment and research, we have come up with state of the art validated methodologies, rigourously collected and thoroughly assessed data to show what resources are saved by using lightweight, corrosion resistant and strong aluminium in products such as cars, trucks, aircraft, food packaging, windows, facades, solar panels and other renewable energy equipment. We have the systems in place to evaluate the benefits of recycling the scrap from end-of-life products - especially in terms of emissions. This enables us to prove that the environmental balance of producing, using and recycling aluminium over and over again evens out, ensuring that our material and the products made of it contribute to a sustainable economy and society."

The EAA's document "Life Cycle Assessment and Aluminium: What you need to know", produced for the European Aluminium Industry critiques several political decisions made using LCA which were not in aluminium's favour. Firstly the Danish government's rate of tax on packaging, and secondly The German government's UBA II study into re-usable glass bottles versus aluminium cans. In both cases they claim that the science was inconclusive and the judgement was subjective and value-based on the part of the assessor, and therefore unfair.[14]

'more than 50 % of the energy used to produce the aluminium supplied to the European market comes from hydropower (hydroelectricity), a clean and renewable energy source.'[15]

There is a large body of evidence that large dams in fact have serious climatic implications (see Fearnside [16]) as well as being ecologically damaging in many other ways (see McCully [17]). Further, they are not in fact renewable, generally silting up and requiring costly de-commissioning after 50 years or less[18].

'Nevertheless, whether aluminium is produced from bauxite or from scrap, these operations are not in competition with each other. They are both integrated and necessary parts of the aluminium material cycle.'[20]