Dr Andrew Shepherd Ritcheson is a psychologist and social scientist who applies his expertise in "clinical, business, military and government settings".[1] Ritcheson runs ASR Consulting and is a former Director and Senior Academic Fellow of the Behavioural Dynamics Institute, part of the Strategic Communication Laboratories group which claims to engage in strategic communication, influence and psychological operations, and election management on a for-profit basis for governments and militaries around the world.

Work with the SCL group 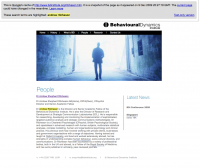 Andrew Ritcheson was listed on the Behavioural Dynamics Institute(BDi) website as Director and Senior Academic Fellow of the institute from 2008 till late 2009 (see right). He was also Director of Research and Development at Strategic Communication Laboratories (SCL) between 2007 and 2009 - with responsibility for "developing and monitoring the implimentation of sophisticated target audience analysis and strategic communication methodologies" (see right). The work of BDi and SCL is largely secretive and unpublicised, and any descriptions are general - for example the BDi website states that it "is an academic institute that specialises in understanding influence and persuasion in order to change audiences’ attitudes and behaviour", and that it "specialises in applying its methodology to military and political campaigns, where the audiences are hostile or friendly, national or international".[2] One element of the group's work is election management, undertaken by SCL Elections, in this capacity Dr Ritcheson was allegedly involved in the organisation of the "Vote No" campagaign for a referendum on constitutional change in St Vincent and The Grenadines through his association with The Athena Trust. [3]

ASR Consulting, LLC is a new venture started by Dr Ritcheson in Washington DC in September 2009 and formally launched online and in the press in April 2010. [4] The press release for the company states that it "specializes in delivering innovative, data-driven and measurement-focused psychosocial solutions to key audience research and engagement programs for the commercial, defense and government sectors".[5] The company advertises expertise in a number of areas such as strategic communication, audience and population research, behavioural modeling,[6] psychographic topography and human terrain analysis.[7]. These interests put the company in broadly the same category as the SCL group in terms of potential activities and clients, although they stress that their approach is distinct in that it is based on an "innovative, data-driven and measurement focussed" approach to understanding key audiences[8], lamenting the ineffectiveness of current approaches which are "well-intentioned but indiscriminant, badly conceived initiatives that suffer from a basic insufficiency in researching the target audience".[9] The company's press release mentions a number of uses for their expertise "from combat commands to public diplomacy" and notes the increasing importance of strategic communication techniques due to "the changing characteristics of the battle space and global infosphere, and the sobering recognition that our adversaries are unlikely to be defeated solely by kinetic means".[10] This sort of language suggests that the clients which the consultancy hopes to attract are political and military actors - this is further underlined by reference in the press release to the White House's National Framework for Strategic Communication 2010. The company's website states that "recent projects have included strategic communications campaigns, audience-message alignment, behavioral change initiatives, targeted aid and assistance programs, and projects to assist in countering violent extremism" [11], showing that the ASR Consulting are breaking into the burgeoning field of private strategic communication, PSYOPS and information operations.