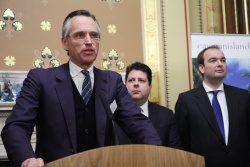 Rupert de Mauley served Parliamentary Under Secretary at the Department for Environment, Food and Rural Affairs (Defra) from 2012-2015. He was appointed in the Cabinet reshuffle of September 2012, with responsibility for resource management.

In October 2013 Lord de Mauley was reshuffled into the role of minister for natural environment and science and research, taking the lead on areas including biodiversity, ecosystem services and bee health. [1]

Having left government after the general election, Lord de Mauley sought the advice of ACOBA in regards to a role as a panel member for sales consultancy Youd Andrews, and took on the role in January 2016. [2]

He was also responsible for air quality, noise and litter, localism as well as the welfare of companion and wild animals. [3]

These activities are now under the remit of Dan Rogerson.[1]

Rupert de Mauley is parliamentary under secretary of state for resource management, the local environment and environmental science at Defra. He was appointed in September 2012. Prior to that he had been a government whip in the House of Lords since the Coalition came to office in May 2010, and before that an opposition whip since 2005. While a whip he served also as a parliamentary spokesman on treasury, business, welfare and other matters.

Brought up on a farm, Lord de Mauley qualified as a chartered accountant, then worked as an investment banker in the City and the Far East in the 1980s and 1990s and ran an IT services company from 1999 to 2006.

He served as a TA soldier from 1975, commanding his regiment from 2003 until retirement in 2005. He rode as an amateur under National Hunt rules and on the flat in the Far East. He is married to Lucinda and their home is a farm in west Oxfordshire. [4]

From Shapiro International public speaking biography (prior to 2010):

Rupert de Mauley pursued parallel civilian and military careers for 30 years from 1975 to 2005. His final appointment in the Territorial Army was as a lieutenant colonel commanding an armoured regiment (2003 – 2004). His period in command was characterised by operational success and high levels of recruitment. He is co-author of a seminal article on battle casualty replacement in the British Army Review. He has visited Iraq and Afghanistan in military liaison and fact finding capacities.

As a civilian, he qualified as a chartered accountant in 1980 and from 1983 to 1999 worked as an investment banker (Samuel Montagu until 1993, then Standard Chartered), principally in mergers and acquisitions. He spent nine years at main board level, leading some of the banks’ largest transactions. He worked in Hong Kong from 1985 to 1988 and Singapore from 1994 to 1999. Working in a dozen Asian countries he built a regional M&A business for Standard Chartered, for which he established and maintained a position at the top of the Asian M&A league tables. He became the managing director of the merchant bank in 1996 and led the establishment of a successful corporate rescue activity following the Asian debt crisis.

In 1999 he became joint founder, controlling shareholder and chairman of FixIT Worldwide Limited, a company providing IT support to professional businesses and financial services companies, growing profits every year and selling the business to a quoted company in 2006. In 2005 he was elected to the House of Lords and quickly promoted to the Conservative front bench as a whip and spokesman on trade and industry. He was subsequently shadow minister at the Cabinet Office and is now shadow minister for Business, Innovation and Skills and for Universities and Further Education. He is also the Treasury whip.

Outside Parliament he runs a forestry business from his farm on the Oxfordshire/ Gloucestershire border, carries out public speaking engagements and is a non executive director. He also rode successfully as an amateur steeplechase jockey.

In 2008 as a Shadow Minister, de Mauley asked the following question in a House of Lords debate on nuclear reactors:

What is their response to reports that the French nuclear safety watchdog ASN has identified safety weaknesses relating to nuclear reactors of the type France hopes to sell to the United Kingdom.

My Lords, the Government's view is that the French nuclear regulator has rightly carried out its functions following the inspection of the nuclear power station being constructed in Flamanville by EDF by drawing the attention of the operator to the necessary areas of action. We also note that the regulator raised issues about the construction procedures at the site and not about the design of the reactor itself.

My Lords, I am grateful to the Minister for that Answer. According to the NII, the migration of skills has placed a severe strain on its ability to find, train and retain the number of skilled employees it needs to assess the different types of reactor for which licences are being sought. What are the Government doing to address that?

My Lords, the Nuclear Installation Inspectorate is currently undertaking a recruitment campaign and has received a number of applications for the vacancies that it foresees in the next two to three years. The Treasury has allowed a 15 per cent pay flexibility in order to assist it.[5]