From Powerbase
(Redirected from John Ritblat)
Jump to: navigation, search 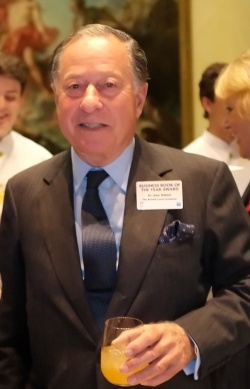 John Henry Ritblat (born 3 October 1935) is a British businessman and philanthropist. Ritblat attended Dulwich College as 'a non-fee-paying boarder'.[1] He later attended the College of Estate Management.[2] His son Jamie Ritblat followed him into the property business.

Ritblat is married to Jill Ritblat (formerly Jill Zilkha, a former barrister and a patron of the arts) , his second wife

his first wife died in a bizarre accident, when she fell out of his executive jet as it was coming in to land. Seven years later, in 1986, he married Jill [Zilkha], a well-known collector of contemporary art. Since then he - and British Land - have been active on the contemporary art scene.[3]

Ritblat, the son of a Hampstead dentist, started work for Edward Erdman, the estate agent who trained several generations of developers, and went on to learn at the feet of another famous figure, the late Sir Max Joseph, founder of Grand Metropolitan. For 10 years, he and another future developer, Neville Conrad, ran a highly successful agency of their own. Ritblat took control of a small company, Union Property, which he reversed into British Land in 1970. In building it up to its present size as one of Britain's top half dozen property groups, Ritblat has earned himself respect and dislike in equal measure.[3]

Ritblat has been involved in science policy and communication. He was a governor of the Weizmann Institute of Science in Israel from 1991 to at least 2008 and is also a Vice President of Weizmann UK the UK fundraising arm of the Institute. He was made a Life Fellow of the Royal Institution in 2001 and joined its Council in 2002, a position he still holds in 2013. He has financially supported the Science Media Centre via donations from British Land (in 2002, 2003, 2005 and 2006) and the JH Ritblat Charitable Trust UK (in 2003, 2004 and 2005). The SMC was set up inside the RI in 2002 and it noted on its website that 'Refurbishment costs were met by a generous donation from John Ritblat. In recognition of this vital support, the main office of the Science Media Centre has been named the John Ritblat room.'[4][5] It is not clear if this refers to personal donations or to those that were from British Land.

Culture and the arts

Details of the Conservative's 2013 summer ball, an event where tickets cost up to £12,000 each and allows attendees to sit at the table with ministers, were leaked to the Guardian. Shore Capital, a Mayfair boutique investment bank led by Howard Shore, booked three 'premier tables'. On these tables sat, David and Samantha Cameron, Ritblat, the investor know as the 'homeless billionaire', Nicolas Berggruen, Slovenian tycoon Darko Horvat and one of Vladimir Putin's aides Vasily Shestakov.[15]