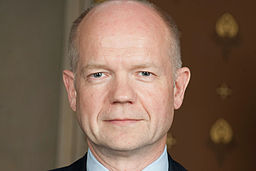 William Hague (Lord Hague of Richmond) is a British Conservative politician who served as foreign secretary from 2010 until 2014 and then as first secretary of state and leader of the House of Commons until May 2015.

Hague was the Conservative Party MP for Richmond from 1989 until he stepped down at the 2015 general election and was replaced by MP Rishi Sunak.[1]

Three months after leaving parliament in 2015, Hague took up several corporate consultancy roles, including as a senior adviser with Teneo, a New-York based lobbying and advisory consultancy.

Although Hague is officially banned under government rules from lobbying on behalf of any organisation until May 2017, it emerged in August 2016 that he would now head Teneo's new Brexit 'client transition unit'. According to The Times, the unit promises to ensure that the concerns of Teneo's blue-chip clients, which include HSBC bank, Coca Cola and Nissan will be heard by government.

Campaigners have accused Teneo of 'lobbying by the back door' and criticised the 'ridiculously loose' rules that allow former ministers and aides to take up highly paid corporate jobs so soon after leaving politics. Hague will also work alongside former trade minister Lord Davies of Abersoch and Sir Michael Rake, the former CBI chairman. A spokesman for Hague claimed, however, he would 'not be undertaking any advocacy for government'.

Industry insiders calculate that the former foreign secretary could be paid at least quarter of a million pounds ( £250,000) for his part-time advice to Teneo. [2]

Life after politics - through the well-paid revolving door

In the Daily Mail, Spinwatch's Tamasin Cave said: ‘How is the public interest served by ex-ministers taking the skills and insider knowledge they gained in government and flogging them to private interest?’ ‘There is a reason why companies hire outgoing ministers. It has become another way of buying influence.’[4]

In September 2015, Hague took up another role as a part time non-executive director at Intercontinental Exchange Inc. (ICE) [5]

In January 2017, Hague was given permission to become a consultant for the finance giant Citigroup, 'providing advice on global, political and economic events' and a 'unique perspective'. [6] He is expected to advise the bank on issues surrounding Brexit.

Hague took up an unpaid role as chairman of the influential Royal United Services Institute (RUSI) think tank in July 2015. Given that he had made a speech to RUSI whilst in office, the Advisory Committee on Business Appointments advised he must wait three months after leaving office to join formally.[7]

He was appointed secretary of state for foreign and Commonwealth affairs in the incoming Coalition Government in 2010.[8] In July 2014, he left the Foreign and Commonwealth Office to become first secretary of state and leader of the House of Commons. It was simultaneously announced that he would stand down from parliament at the 2015 general election.[9]