From Powerbase
Revision as of 16:11, 4 May 2015 by Josh Leeson (talk | contribs)
(diff) ← Older revision | Latest revision (diff) | Newer revision → (diff)
Jump to: navigation, search
"One can't help bragging about knowing her, the Prime Minister, because it's such a wonderful thing that you think about it all the time".

Timothy John Leigh Bell, Lord of Belgravia in the City of Westminster (born 18 October 1941) is a public relations executive best known as an advisor to Margaret Thatcher

A biographical note from the Institute of Practitioners in Advertising stated:

Lord Bell helped found the Saatchi & Saatchi advertising agency in 1970. As International Chairman, he took Saatchi & Saatchi into its position as the biggest worldwide agency network in 1981. He became Deputy Chairman of The Lowe Group in 1985 and he subsequently bought out the communications division, Lowe Bell Communications, in 1989. He is now Chairman and a major shareholder in Chime Communications Plc, the holding company listed on the London Stock Exchange, which owns Bell Pottinger Communications (formerly Lowe Bell), and its sister advertising agency HHCL.

According to Corporate Watch UK: [2]

One of the most famous British spin doctors is Sir Tim Bell, of Bell Pottinger. In the late 1970s Bell was a rising star at advertising agency, Saatchi & Saatchi. When Saatchi & Saatchi were hired to handle advertising for the Conservative's 1979 election campaign, Bell was to become one of Margaret Thatcher's personal spin doctors. He coached her on interview technique and even advised on clothing and hairstyle choices. As the 1979 election campaign intensified, he and Gordon Reece, media relations supremo at Conservative Central Office, "assiduously courted the editors of two newspapers they had singled out for special attention: Larry Lamb of the Sun and David English of the Daily Mail. They would drop by regularly for informal meetings with Lamb, usually in the evenings over large quantities of champagne," writes Mark Hollingsworth in his biography of Bell.[3]

Bell's work for the Conservative party did not end there. In 1984 he was seconded to the National Coal Board (NCB) to advise on media strategy at the start of the miners' strike. His duties went far beyond mere media relations, however. So highly was Bell regarded that he became closely involved with the overall political strategy as the industrial dispute turned into political warfare between the NUM and the government. Whilst the NCB own industrial relations department wanted to reach a negotiated settlement, Bell, amongst others, was able to persuade Ian McGregor to accept nothing less than an unconditional return to work.[4] 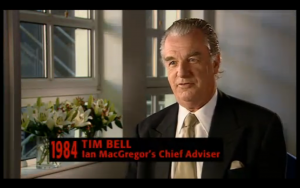 Describing the Conservative Government's media strategy during the miners strike in 2009, Bell said: ‘The strategy wasn’t about winning public opinion. It wasn’t about persuading the media. It was about getting the miners to get back to work. To give in on their strike and to drift back to work with their tails between their legs, heads hung low, having failed. That, I’m afraid, was what it was about.’ [5]

In 1984, Bell orchestrated a media operation to protect Mark Thatcher from negative publicity about his business dealings in Oman which risked damaging his mother, Prime Minister Margaret Thatcher. he hired David Boddy, who led an informal group of PR advisors financed by Conservative-supporting businessmen.[6] He was involved in meetings which led to a decision to arrange a job for Mark in the United States.[7]

When Mark Thatcher was charged under South Africa's Foreign Military Assistance Act in 2004, Bell issued a statement on his behalf.[8]

Bell was instrumental in the campaign that halted the Serious Fraud Office investigation of the Al-Yamamah deal in 2007.[9]

Malaysia and the Pergau Dam deal

Bell has had a public relations contract with the Malaysian government.[10] He has also represented Tan Sri Arumagam, a close associate of former Malaysian Prime Minister, Dr Mahathir Mohammed.[11]

In this case, Sir Tim Bell, well known as her PR adviser is also adviser to the Malaysian PM and to Tan Sri Armugam, who controls GEC Malaysia, heavily involved in several of the contracts under the deal.[12]

Bell worked for FW de Klerk and the National Party during the first free elections in South Africa in 1991.[13]

Following Margaret Thatcher's resignation as Prime Minister, Bell arranged for the Thatcher family to purchase 73 Belgravia Square from the Barclay Brothers on favourable terms, over the objections of Mark Thatcher, who told him "he wasn't going to have a couple of businessmen just walk in and buy up his mother like that."[14]

Bell became a trustee of the Margaret Thatcher Foundation on its foundation in 1991.[15]

Bell was a PR consultant for Boris Berezovsky and briefed journalists after Alexander Litvinenko was hospitalised with what eventually turned out to be a lethal dose of redioactive polonium poisoning.[16]

Jacques Peretti described Tim Bell as "the spin chief to more than 40 governments (and best friend of both Murdoch and Mrs Thatcher)" [17] The Guardian lists Bell at number 79 on their list of the most influential people in the media. [18]

Chime's PR company Bell Pottinger has been criticised for its work for the Egypt's ministry of information and Bahrain's economic development board after the uprisings of 2011. Bell defended his firm and his clients by attacking the BBC. Telling the BBC that it has only got to "part of the truth", adding for good measure: "I think the BBC, which has 10 times the resources of everyone else, should try harder." [19]

In 2010 the Guardian revealed that PR companies including Chime Communications were receiving as much as £2 million for "reputation laundering" for government regimes in Saudi Arabia, Rwanda and Kazakhstan. The Kremlin, Sri Lanka and Zambia were exposed as Chime clients. Lord Tim Bell the chair of Chime and Bell Pottinger Communications defended the firm “If people want to communicate their argument we take the view that they are allowed to do so.” [20]

The London Evening Standard reported that Bell was instrumental in the departure of Liam Fox from his position as Defence Minister in the UK cabinet in 2011. Bell reportedly passed details of how Fox's adviser Adam Werritty was funded to The Times making Fox's position untenable. [21]