Difference between revisions of "Storey’s Gate" 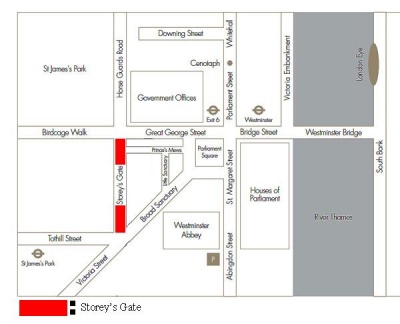 Storey's Gate is a location in central London of both historical and contemporary political significance. It is a few minutes walk from the Palace of Westminster and even less far from Westminster Abbey which bounds the street at its southern end at the Junction of Victoria Street, Broad Sanctuary and Tothill Street. From here the Street runs North for four blocks (on the left hand side) ending at the junction with Great George Street as it runs East to West. A few yards to the left the Great George Street becomes Birdcage Walk at the junction with Horse Guards Road, which continues northwards.

Clutha House is located at 10 Storey's Gate and houses right wing think tanks including Civitas, Policy Exchange and the Centre for Social Cohesion.

The numbers on the Western side of the street run in consecutive sequence from the North to the South. Much of the first block is taken up with the headquarters of the Institution of Mechanical Engineers, which has its address around the corner at 1 Birdcage Walk.[2]

10 Storey's Gate Westminster is the address for Clutha House a building let by agents GM Investment Trustees[4]. The building is located in central London beside Westminster Abbey, Queen Elizabeth II Conference Centre and Methodist Central Hall[5]. The building is home to various think tanks including the Policy Exchange, Civitas and Centre for Social Cohesion[6]. The address is also home to many businesses including solicitors Hollingworth Bissell[7], and technology firm Insight Management and Systems Consultants Limited[8]. Clutha House was also the location of former Liberal Democrat leader Menzies Campbell's 2005 leadrship campaign headquarters[9]. The Parliamentary Advisory Council for Transport Safety is based on the 3rd floor of the Clutha House building. Other organisations at number 10 include the Banco Pastor Office and the Industrial Development Board For Northern Ireland. 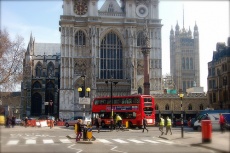 Central Hall Westminster, a conference centre that can accommodate up to 2300 people is located at the south end of Storey's Gate across the road from Westminister Abbey. Westminster Hall is also the address for the HSBC bank on Storey's Gate[11].