Sarah Norcross has been the director of the Progress Educational Trust (PET) since the 3rd of December 2007[1]. PET has been described as 'a registered charity that works to create an environment in which research and practice in genetics and assisted reproduction will thrive'[2]. She is also commissioning editor of their online weekly digest BioNews, for whom she began writing articles in 2008. Prior to this, according to her BioNews profile[3], she was a barrister on the Northern Circuit and studied law at King’s College London.

Board Memberships and Affiliations

Norcross has a number of current board memberships and affiliations. Since at least 2010[4], she has been the Co-Chair of the campaigning organisation Fertility Fairness[5], alongside Susan Seenan, which is entirely funded by Merck Serono and Ferring Pharmaceuticals[6]. She was also the vice chair and trustee for the Daisy Network premature Menopause Support Group for more than 7 years, likely between around 1999 and 2007[7]. She is also a member of: the HFEA National Gamete Donation Strategy Group; the education, engagement and training working group for the UK government’s Human Genomics strategy group[8], which has the remit to 'monitor advances in genetic and genomics research…to evaluate their benefit to healthcare services in the NHS', and to 'develop, in partnership with other stakeholders, a vision for genomics in the NHS'[9]. Alastair Kent of the Genetic Alliance UK (formerly the Gentic Interest Group) is also a member of this training working group. Norcross is also a member of the Association of Fertility Patient Organisations (AFPO), which 'is a group of patient, donor and other voluntary organisations which is co-ordinated by Infertility Network UK', although this group has no web presence. The organisations involved in AFPO are: the Infertility Network UK, the Donor Conception Network, the Multiple Births Foundation, the Daisy Network, the Progress Educational Trust, and the National Gamete Donation Trust. The group was set up by the current chair of Fertility Europe, Susan Seenan. In 2012 Norcross was a member of the advisory group on the paper entitled 'Assessing Child Welfare under the Human Fertilisation and Embryology Act: The New Law' carried out at the University of Kent's Centre for Parenting Culture Studies, by Ellie Lee, Jan Macvarish and Sally Sheldon[10]. According to BioNews she is also a member of the research advisory group on Transnational Reproduction, although she is not listed under the people section on the website link provided[11][12]. Jennie Bristow was given thanks for editorial assistance. Sarah Norcross also chaired and coordinated the steering group of clinicians, scientists, patient support groups and medical research charities which fed into policy for the Human Fertilisation and Embryology Act 2008 as it passed through both Houses of Parliament, and she continued this role during the implementation of the Act by the UK Government's Department of Health and the Human Fertilisation and Embryology Authority[13].

Her linkedin profile links to the European Society of Human Reproduction and Embryology (ESHRE), SBK Healthcare, and the Pharmaceutical, Biotech & Healthcare Discussion Group. She is also following the companies: Abbott (hospital healthcare), Sofia Genetics SA (a leader in data driven medicine and clinical genomics, working with health professionals to improve the prediction and care paths of genetic diseases), and the London Women's clinic[14].

Norcross has worked closely with Sandy Starr at PET, as shown in the annual reports and listed in the panel appearances section below. She has also worked with Starr and core LM associate Dr Mike Fitzpatrick towards a school educational pack on genetics. She also has a continued relationship working with LM Network associate Juliet Tizzard, now head of the HFEA, who previously worked for PET in her position. The trustees of PET, as of 9 April 2015, are: Anthony Hickinbotham, John Parsons Dr Christine Patch, Professor John Galloway, Ms Laura Riley, Dr Jessica Louise Buxton, and Ms Fiona Fox. Prior to this she appears to have an 8 year history of involvement with infertility networks that began with her involvement with the Daisy Network premature Menopause Support Group, and worked as a barrister carrying out advocacy in the civil and criminal courts on the Northern Circuit[15].

She is a fairly regular presence as a commentator in the mainstream media commenting on issues surrounding IVF treatment.

Norcross argues that changes in regulation relating to the use of 3 donors DNA in IVF has been too slow:

While we welcome the Government's decisions, we are disappointed by the time it has taken to reach this point in the process[16]

The people who oppose this will be saying it's too quick, why the rush, but inevitably the delay is passed on to people who want to avoid passing on these devastating conditions to their children[17]

UK scientists are leading the way in the prevention of inherited mitochondrial disease. Now, with the public voicing its clear support, UK policymakers can lead the way in showing how policy and regulation can keep pace with scientific developments, so that patients can benefit without delay[18]

Norcross speaks implicitly against the precautionary principle in a number of articles and seeks to speed up processes whereby new technologies are accepted, and regulations are changed or removed. For example, Norcross also argues the slow pace of genetic regulation changes will impact families most when considering the length of time the government took to respond to the HFEA’s third scientific review into safety and efficacy of mitochondria replacement:

The committee has found the proposed techniques to avoid passing on mitochondrial disease “not unsafe”. That is as good as it gets for this type of novel technique in reproductive medicine. There is nothing in this third scientific review to prevent the Government passing legislation to allow these treatments to be used in the clinic, and so we hope it is third time lucky for families affected by mitochondrial disease. The findings of this review should mean that affected families are a step closer to being able to avoid passing on these debilitating diseases[19] 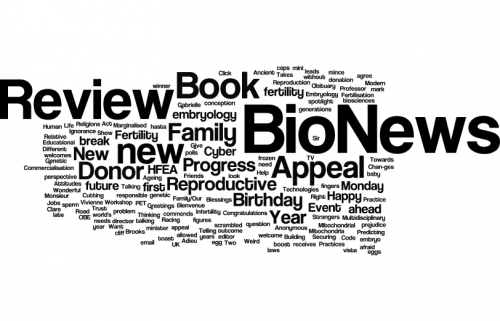 PET is not afraid to tackle difficult subjects and is adept at framing the discussion of these even when they involve issues of personal and community sensitivity such as cousin marriage, race and mental health. It is to PET's great credit that these topics can be discussed so openly and freely. The professionalism and sensitivity with which they approach each subject is excellent[20]

Commenting on the tactics of the Science Media Centre

I had gained an insight into these via PET's communications officer, Sandy Starr, who had been a 'private' in this battle and attended some of the 'war campaign' meetings My perspective was this was a professional group of press officers from various organisations led by Fiona Fox director of the SMC, doing their job effectively and professionally without the hope of a medal[21]

Chronology of Board memberships and Affiliations