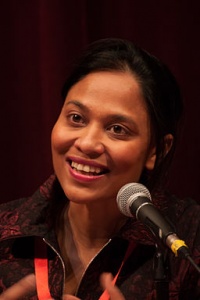 She worked at the Communities Directorate of the Home Office, leading a work programme in response to the 2001 disturbances in the North of England (2002-2005).[3]

Prior to her election in May 2010, she was associate director of the Young Foundation.[3]

She also worked as research assistant to Lord Young of Dartington, helping him to set up Futureversity (formerly known as Tower Hamlets Summer University) and Language Line, a national telephone interpreting company.[3]

In November 2015, Ali was appointed as a member of the Energy and Climate Change Select Committee. [4]

In October 2010, Ali was appointed to the Labour front bench as Shadow Minister for International Development.[3]

In September 2014, Ali resigned from the front bench in order to abstain from voting on whether Britain should use air strikes on ISIS in Iraq. She decided she would not take part in the vote as she does not believe air strikes would be effective in "targeting terrorists and not harming innocent civilians".[5]