Difference between revisions of "Roger Wheeler"

General Sir Roger Wheeler is a former head of the British Army and the chairman of Thales Air Defence Ltd.

Wheeler is also non-executive director of Aegis,[1] a London based, privately owned, British security and risk management company with overseas offices in Afghanistan, Bahrain, Iraq and the USA.[2] 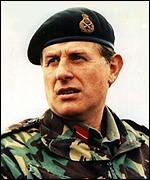 Roger Wheeler had a long and distinguished military career. As Chief of the General Staff, the professional head of the British Army, he brings to Aegis experience of the highest levels of political/military engagement both nationally and internationally. He is a member of the Advisory Board of Thales UK and the Serious Organised Crime Agency. He is Constable of HM Tower of London. He is a non–executive director having previously served on the Aegis Advisory Council.[3]

Wheeler was named as the military adviser to the Iraq Inquiry chaired by Sir John Chilcot in October 2009.[4] His appointment was questioned because of his role as a director of Aegis, which had profited from the Iraq War.[5]