Policy Exchange is a neoconservative orientated think-tank with close ties to Conservative leader David Cameron. [1] It was launched in April 2002 by Francis Maude and Archie Norman with Nicholas Boles as its founding director.[2] It is part of the Stockholm Network [3] a working group of European market-oriented think-tanks.

In a March 2009 presentation Tim Montgomerie and Matthew Elliott described Policy Exchange as part of the infrastructure of the conservative movement in Britain.[4]

Policy Exchange was established by a group of Conservative MPs who had backed Michael Portillo’s campaign in the 2001 Conservative leadership contest. Portillo, who had recently admitted having had homosexual experiences, advocated a shift towards more liberal social attitudes, whilst maintaining a commitment to right-wing economic policy. Dubbed ‘Portillistas’ by Westminster commentators, Portillo’s backers saw themselves as modernisers of an out of touch party which had put off potential voters through its negativity, xenophobia and social conservatism.

Portillo withdrew from the Conservative leadership race on the evening of 17 July 2001 and subsequently announced that he would leave politics. According to the Independent the eleven Shadow Cabinet colleagues who had backed him were subsequently dubbed ‘the living dead’ in Westminster. [5]

Only days later, one of the ‘living dead’, Archie Norman, told the Daily Telegraph’s Rachel Sylvester that he and other Portillo supporters were planning to set up a think-tank saying: ‘I came into public life to help transform the Conservative Party so it can win again, and that's what I'm still about.’ [6] On 21 July the Daily Telegraph ran a front page headline, ‘Portillo supporters to fight on’. Archie Norman was quoted as saying:

We've got hundreds of thousands of people who don't want to lose what we were creating, we've got financial support from people who wanted to invest in this as the future of the party and we would like to find a way of channelling that and harnessing it. [7]

That August the Daily Telegraph published a letter from the ‘Portillistas’ in which they said they planned to establish ‘a new forum, firmly rooted within the party, devoted to developing the ideas that will form the basis of a genuinely modern Conservative Party.’ [8] The letter was signed by Francis Maude, Archie Norman, Tim Yeo, Andrew Mackay, Peter Ainsworth, Theresa May, Edward Garnier, Peter Lilley, Damian Green, Nicholas Soames, Julie Kirkbride, Stephen Dorrell and Nicholas Gibb. [9]

In early October, a week before the Tory Party Conference, the party’s new leader Iain Duncan Smith reportedly met for private talks with Francis Maude, and the latter agreed to delay the launch of the think-tank until after the party conference. [10] The truce was cemented with an offer from the ‘Portillistas’ that Iain Duncan Smith would be appointed Honoury President of the think-tank [11] – an offer which apparently came to nothing.

The logos for 'XChance', as Policy Exchange was originally branded in 2001, and the affiliated group Conservatives for Change or 'CChange'. The two were presumably kept separate to allow Policy Exchange to apply for charitable status as a non-partisan organisation.

Archie Norman, Francis Maude, and their allies decided to set up two seperate think-tanks as part of their modernisation project. One, XChange Ideas or simply XChange, would be rebranded as Policy Exchange a few months later. A company limited by guarantee, formed in October 2001, became XChange Ideas on 9 November 2001. A seperate company Conservatives for Change was also was set up that October, and was branded CChange. The two were presumably kept seperate to allow Policy Exchange to apply for charitable status as a non-partisan organisation. Conservatives for Change supplied the initial funding for Policy Exchange, with a loan of £75,000. [12]

The full website <http://www.policyexchange.org.uk> was registered on 28 January 2002 and went live a few months later. [13] Policy Exchange was officially launched at the Tate Gallery in Central London on the evening of 29 April 2002. [14]

In August 2006 Policy Exchange hosted a seminar the title of which was 'Why Are Britain's Universities Incubating Islamist Extremism?'. [15] It was attended by right-wing figures including Anthony Glees, the author of When Students Turn to Terror; the Scottish right-wing intellectual Tom Gallagher; and the right-wing Irish historian Ruth Dudley Edwards.

In an online article promoting the event [16] and at the seminar itself, [17] Tom Gallagher argued that a main cause of 'radicalisation' amongst young Muslims was not injustice, but that Muslim students are not intellectually capable of achieving in higher education. 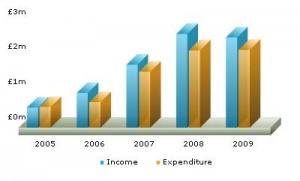 Policy Exchange's main source of income has been through donations, but it also receives significant funding through the sponsorship of research and its 'Business Forum', which is part of the think-tank's 'Corporate Engagement'. [18] In early 2006 PR Week reported that companies were paying £5,000 to £10,000 to be part of the forum, and that members included BP, SAB Miller, BSkyB and Bupa. [19] Policy Exchange states that corporations cannot commission research, but that they can 'contribute ideas and give advice to Policy Exchange’s research programme[s]'. [20] In its 2008 accounts, Policy Exchange reported that:

The activities of the Business Forum group made a particularly strong contribution to fundraising during the period, with the number of members more than doubling to 27. The Policy Exchange Business Forum exists to engage corporates in the research work of the charity, by hosting regular round table events where members can come together to listen to influential policy makers and discuss the issues raised. Many members went on to work directly with our research teams by giving financial and/or research support. [21]

Although available, information from the think-tank’s 2008 financial statements have not been included in this table as they no longer provide as detailed a breakdown of the various sources of income. From October 2007, income from donations and research sponsorship are given as one lump some (reported as ‘Voluntary Income’), and Business Forum membership, the sale of reports and other sources of income are given as another lump sum (reported as ‘Activities for generating funds’). [23]