Difference between revisions of "Patience Wheatcroft" 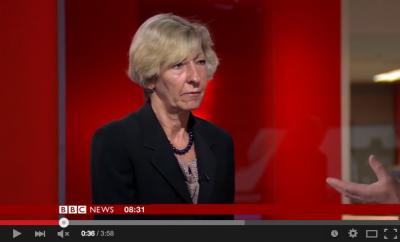 Patience Wheatcroft (Baroness Wheatcroft) is a Conservative member of the House of Lords.[1] She was made a life peer in December 2010.[2] She is a former editor of FT.com[3], the Sunday Telegraph and the Wall Street Journal Europe.[4]

In October 2014 Wheatcroft was appointed as a member of the fracking industry-funded 'independent' Task Force on Shale Gas but later resigned to concentrate on other interests.

In 2011, Wheatcroft was named as a member of the board of Huawei Technologies Co. and was tasked with "advising the company on building a positive reputation". The appointment coincided with parliament investigating whether a Huawei telecom-equipment contract made the UK vulnerable to hacking. In a Lords debate, Wheatcroft stood up for Huawei and spoke of the positive work they are doing, afterwards she said her comments did not break the House of Lords rules because she was "not speaker on their behalf. I was speaking on my own behalf."[5]

In 2011 Wheatcroft sat on the joint committee that scrutinised the UK's Draft Financial Services Bill, which introduces a new structure for financial regulation. After this committee disbanded shortly after it reported in 2011, she took up a number of paid roles for financial and lobbying companies. [6]

In October 2014 Wheatcroft was announced as a member of a new fracking industry funded 'independent' Task Force on Shale Gas headed by Lord Chris Smith. Critics against this appointment pointed to her previous role as a non-executive director of Barclays plc, which has financial interests in shale gas, as well as consultancy work for lobbying firms. Wheatcroft later resigned to concentrate on other interests.

Wheatcroft sat on the board of think tank Policy Exchange from June 2012 until November 2013.

Wheatcroft is a non-executive director at wealth management firm St James’s Place plc (since 2012) and at Fiat S.p.A (automobiles)

She was a non-executive director at Barclays in 1 January 2008, it was also reported that she would be earning earning £65,000 for 25 days' work as a non-executive.[7]. Wheatcroft left this role in 30 September 2009 when appointed editor of the Wall Street Journal which precluded her from holding any corporate directorships[8]

Director of Association of Leading Visitor Attractions, since 20 September 2012.[9]

She sat on the UK advisory board of Huawei Technologies until July 2014.[10]

Baroness Wheatcroft is a paid 'business consultant (legal services' to lobbyist-law firm DLA Piper, which represents some of the largest financial firms in the world. [2]

She is also a paid member of the advisory board of financial and corporate lobbyists Pelham Bell Pottinger[2], a role she has held since 2012.[11]

She was a task force member of the Henry Jackson Initiative 2012 report 'Towards an Inclusive Capitalism'.