Over The Rainbow - The Zionist Movement

Over The Rainbow - The Zionist Movement was founded in May 2014 to promote Zionism and increase support for Israel.

According to its website, OTR's aim is 'to restore Zionism its vitality, the Herzlian luster and magic, to update the Zionist vision and make it relevant for the Jews of the world in the 21st century, wherever they live.'[1]

The Over The Rainbow Movement was founded in 2014 by a group of idealistic Jews in order to update and revitalize the Zionist vision and make that vision and the Zionist institutions that represent it more relevant to the global Jewish community in the 21st century.[2]

The vision of the movement is being cooperatively devised by Jewish community leaders from around the world working together via the internet. We are diverse group of individuals from different communities who are fed up with the deligitimization attacks against Zionism and who would like to see the term Zionism once again have a positive connotation in public discourse...We believe that a change in the discourse concerning Zionism will strengthen the Jewish people’s values and pride, and will draw the global Jewish community closer, especially the younger generation. Moreover, a revitalization of Zionist discord will help bring Diaspora Jewish communities closer to Israel. 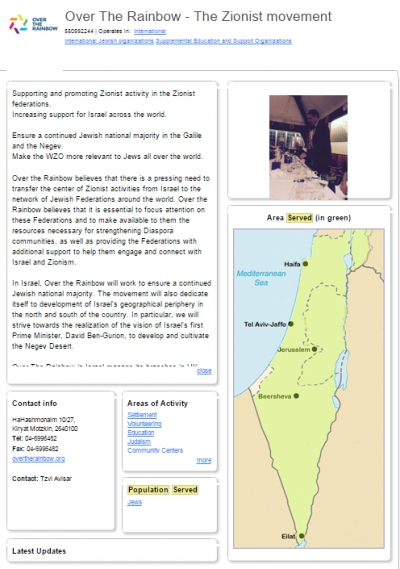 In Israel, OTR says it 'will work to ensure a continued Jewish national majority'. It reportedly particularly wants to 'dedicate itself to development of Israel’s geographical periphery in the north and south of the country', especially contributing to ensuring 'a continued Jewish national majority in the Galile and the Negev and 'the realization of the vision of Israel’s first Prime Minister, David Ben-Gurion, to develop and cultivate the Negev Desert'.[2]

Its worldwide activities are said to include those falling into categories which include 'Judaism', and 'Settlement'.[2] Combined with the implications of a screenshot (right) of the Over The Rainbow profile on the website Israel Gives taken in December 2014 (which has since been changed), this suggests that OTR may be supporting settlement activities in illegally occupied territory. The "area served" in green, according to the map, includes the entirety of Jerusalem and the West Bank (as well as the occupied Syrian Golan Heights). The "population served" is specified as "Jews", ruling out any possible claim that its operations in these areas could be for the benefit of the Palestinian population.

Over The Rainbow reportedly has between seven and nine organisations worldwide. OTR Israel manages affiliated branches in the UK, Italy, South Africa, Germany, Canada and Australia.[2] By April 2015 there were also branches in the Netherlands and Hungary. The UK branch is called the Israel Solidarity Campaign.

They all aim to support and promote 'Zionist activity in the Zionist federations' and increase 'support for Israel across the world'. OTR stressed the 'pressing need to transfer the center of Zionist activities from Israel to the network of Jewish Federations around the world' and believes that it is essential to focus attention on these Federations and to make available to them the resources necessary for strengthening Diaspora communities, as well as providing the Federations with additional support to help them engage and connect with Israel and Zionism'. It also wants to 'make the WZO more relevant to Jews all over the world'.[2]

OTR's newsletter of 22 April 2015, reported that it would be 'producing Israeli Independence events in Germany and Italy this month', adding:

The main events will be attended by thousands of visitors and will be held in Bremen and Milano in the presence of representatives from national institutions and the Israeli consulates. The program includes a display of Israel's achievements in various fields, screening Israeli documentaries, shows by Israeli folk dancing groups and a public dancing, culinary happening based on Israeli cuisine, national institutions PR stands, lectures of Israeli speakers and much more...

The 'first edition' of the monthly "OverTheRainbow" newsletter was published on 22 April 2015. Describing it as 'an attempt to strengthen the ties between our members world-wide', CEO Tzvi Avisar said it will reportedly 'serve as a key tool of communication with our activists and allow our movement to further increase its inner-cooperaion (sic)'.

In 2015, one estimate put its membership at 4,500 people across the seven countries in which it operates.[3]

Over The Rainbow reportedly required members to sign up to the Jerusalem Program, first revised by the 27th Zionist Congress in 1968, and more recently at the meeting of the Zionist General Council in June 2004.[3]

According to one source consulted in April 2015, Over the Rainbow reportedly had '1 full-time and 3 part-time staff members'[2]. However on LinkedIn OTR is said to have between 11 -50 employees.[4]

Over the Rainbow is eligible for tax-deductible donations in the USA.[2] In Israel it is a registered association, number 580592244.[3]

Its website contains no information about how it is funded.