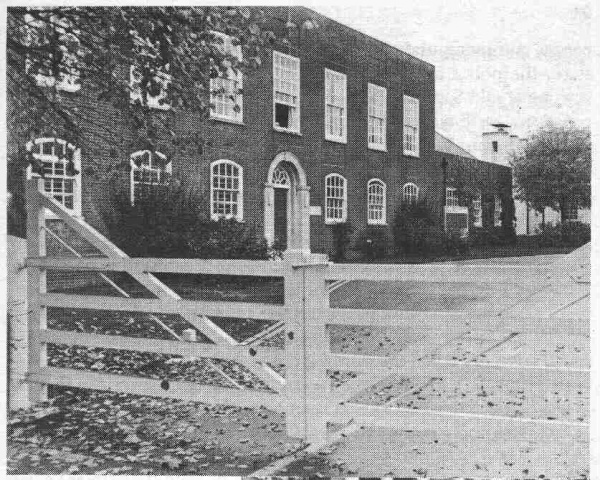 Old Sarum was a British military base operated by the RAF. According to the BBC 'In 1971 the RAF handed Old Sarum over to the Army and by 1979 the station had been closed as a military base.'[1] From at least 1973/4 and possibly earlier Old Sarum was the base for the Joint Warfare Establishment and for UK psychological operations training.

Latterly Old Sarum has been mentioned in the Bloody Sunday Enquiry.[2] Britain used to hold its main psychological operation courses at Ashford in Kent, Caterrick in Yorkshire, Bradbury Lines (The SAS camp in Hereford) and Old Sarum in Wiltshire, where psyops courses for RAF officers are held. in recent times these have moved to Chicksands in Wiltshire where both Psyops, the Defence Intelligence and Security Centre, the Intelligence Corps and 15 (UK) Psychological Operations Group are based.

On average 16 men, consisting of Green Jackets, SAS, Royal Marines and Royal Artillery, together with members from the Ministry of Defence (MOD) and Foreign and Commonwealth Office (FCO), take part. The existence of psyop courses was kept secret until Robert Brown, the UK Army Minister was forced to admit in 1976. Approximately 250 take these courses every year. Frank Kitson, one of the organizers of psyop courses, had complained about the small number of 18 taking part in Old Sarum. According to British Government figures up to 1976, 262 civilians and 1858 Army officers had taken these courses.[3]

According to confidential Whitehall documents leaked to the Irish Times the headquarters of the operation - code-named Psyops - was Old Sarum: the secret department of dirty tricks and black propaganda that trained senior civil servants, army officers and members of the Special Branch in 'psychological warfare' against anti-establishment groups and parties.[4]

Psyops' main aim, one document stated, is to:

"support the efforts of all other measures, military and political, against the enemy to weaken his will to continue hostilities and to reduce his capacity to wage war [...] Psychological warfare relates to an emergency or a state of hostilities [...] Strategic psywar pursues long-term and mainly political objectives. It is designed to undermine the will of an enemy or hostile group to fight and to reduce the capacity to wage war. It can be directed against the dominating political party in the enemy country, the government and/or against the population as a whole, or a particular element in it. It is planned and controlled by the highest political authority.'"

The strategy, says another part of the document, is to "create attitudes and behaviour favourable to the achievement of political and military objectives" in times of peace and war.

The Irish Times disclosures forced the government to reveal that the Psyops unit has been working since 1973. The Ministry of Defence admitted that 262 civil servants and 1,858 army officers had been through training in psychological warfare for internal security purposes and against 'subversive' groups.

According to Newsline officially they were sent to Old Sarum for 'training'. But skill in dirty tricks and black propaganda necessarily involves practical experiences.

"According to the Army Minister Robert Brown, the Old Sarum courses began in 1973/4 - the year that the revolutionary implication of the dockers' and miners' strikes against the Heath government jolted the establishment. The precise nature of the black propaganda operations masterminded by Psyops cannot be known."[5]

According to Peter Watson [6] the star speaker was Lt. Col. B. R. Johnston, described as 'the foremost British authority on psyops'. According to John McGuffin's account of the British government experimentation in torture:[7]

"He spoke about the useful experience that they could all gather from N. Ireland. (Johnston, whose position has always been shrouded in secrecy eventually came to the public's attention during the 'ABC' case, when two journalists, Duncan Campbell, Crispin Aubrey and a former soldier called Berry were tried for publishing 'official secrets' about Britain's telecommunication spying activities in Time Out and the Leveller, two London magazines. Johnston gave evidence against them but was only described in court as 'Colonel B.' Gleefully the Leveller then published his name and issued badges to all attending the court proclaiming who he was. The prosecution collapsed with egg over its face and the accused escaped with fines.)"

"The courses, which include demonstrations of SD [Sensory Deprivation], are highly secret. On several occasions the relevant ministers in the British Government have lied and denied their existence. Even when the Army Minister Robert Brown was forced to admit, in 1976, that the courses did take place, he lied and said that they had only started in '1973-4'. In fact, as Watson has shown, they began at least in 1971 and possibly sooner. Whitehall sources vaguely stated that somewhat over 250 personnel underwent the courses per annum. One of the organizers of psyops, the famous/infamous Brigadier Kitson has bemoaned the 'fact' that the psyops team in Old Sarum numbers only 18 (an implausible figure), but, nonetheless, even if notoriously underestimated Government figures are to be believed, up to October 1976, 262 civilians and 1,858 Army officers had been through the course."

In the Bloody Sunday Inquiry many connections related to psyops have been denied by the Army officers, particularly the role of the intelligence services in Northern Ireland: and particularly the organisation Information Policy:

"Colonel Tugwell said that, although the intelligence community took a passing interest in the work of the IP unit, they did not carry out joint operations during his time in Northern Ireland. He denied suggestions that IP was a separate unit, engaging in black propaganda for the Intelligence Services under the cover of Public Relations. He also refuted Colin Wallace’s evidence that IP was in fact PsyOps, operating under a different name, adding that Colin Wallace had never worked for him, being strictly a PR operative. He added that he was unaware at the time that INQ1873, who worked as his deputy, had been the head of the Army Psychological Operations branch at the Joint Warfare Establishment at Old Sarum, although he knew that he was a PsyOps specialist.[8]

On Frank Kitson, the Historian Bernard Porter has stated:

"Between 1970 and 1972 Kitson served in Northern Ireland as commander of a brigade in Belfast. He may have been largely responsible for the setting up and development of ‘Psyops’ units there. If he was not, then somebody else was. By all accounts this side of the army’s work expanded enormously over the next ten years, and involved some techniques which could be described as devious. That may be putting it mildly indeed. Among the ‘tricks’ attributed to various British intelligence agencies in Northern Ireland in the 1970s - army intelligence, MI5, MI6, British Special Branch, RUC Special Branch - were torture, for which Britain was censured by the European Human Rights Commission in 1976; murder, faked to look like ‘sectarian’ killings; the planting of bombs in Dublin in 1974 ...; homosexual seduction and blackmail; ‘black’ propaganda and disinformation; ‘shooting to kill’; fabricating evidence; and ‘covering up’. At one stage, because of inter-departmental rivalry, MI5 and MI6 were rumoured to be indulging in covert operations against each other..."[9]

Other units at Old Sarum

According to the Ministry of Defence:

In January 1968, the Joint Air Transport Establishment (JATE) was formed with its headquarters at Old Sarum, Wiltshire which at the time was also the home of the Joint Warfare Establishment (JWE) and the Army Air Transport Development Centre (AATDC). The initial JATE Organisation was based on a consortium of 3 separate units, operating under the co-ordinated control of Headquarters JATE. The 3 units in question comprised of the Army's long serving AATDC, AFTDU and a new organisation titled the Joint Helicopter Development Unit, (JHDU).

The JHDU added a Naval presence within the JATE organisation. There was a close link between JWE and JATE with the post of JATE Commandant being combined with the Deputy Commandant at JWE. In 1970 the MOD decided JATE should be based entirely at RAF Abingdon (the home of ATDU) and the close ties with JWE ceased. It was also decided that the main element of JHDU should become independent of JATE and remain at Old Sarum under the new title of Joint Helicopter Tactical Development Unit (JHTDU).[10]