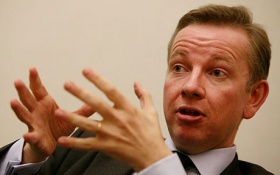 From 2010 until July 2014, he was the Secretary of State for Education. [2] Prior to 2010, he was the shadow secretary of state for children schools and families and a close policy aide of David Cameron. He was formerly a deputy editor of The Times, and latterly a columnist there. From June 2002 to January 2006 he was Chairman of the right-wing think-tank Policy Exchange which has been influential on Conservative Party policy.

Gove was born in Edinburgh on 26 August 1967, the son of of Ernest and Christine Gove. [3] According to this official biography, his father ran a fish-processing business and his mother was a lab assistant at Aberdeen University before working at Aberdeen School for the Deaf. [4]

Gove attended Robert Gordon’s College in Aberdeen and Lady Margaret Hall, Oxford where he was awarded a BA in English in 1988. He worked as a reporter for the Aberdeen Press and Journal in 1989 and then a researcher and reporter for Scottish Television from 1990 to 1991. From 1991 to 1995 he worked as a reporter for BBC News and Current Affairs, [5] working on the Today programme and On The Record. [6] During his time he wrote his first book Michael Portillo: The Future of the Right. He joined The Times in 1996. [7] On his official website he states that he has 'used his position as a writer for The Times and a broadcaster on the BBC to fight for greater personal freedom, a tougher line on crime, a more dynamic economy, a cleaner environment, stronger defence and a better deal for hard-pressed families.' [8] In one notable article in February 2003 he described himself as a 'right-wing polemicist' and declared his love for Tony Blair. In the article, which was headed 'I can't fight my feelings any more: I love Tony', Gove wrote: 'Central to any current assessment of Mr Blair has to be the manner in which he is handling the Iraq crisis,' but also added that: Blair was 'brave, to introduce market pressures into higher education by pushing through university top-up fees in the teeth of opposition from his egalitarian Chancellor. He’s been correct in conceding, to the annoyance of his wife I’m sure, that the European Convention on Human Rights gets in the way of a sane asylum policy. In dealing with the firefighters, and their absurdly selfish strike, he’s been satisfactorily resolute. [9]

From June 2002 to January 2006 he was Chairman of the right-wing think-tank Policy Exchange. In 2005 Gove was elected Conservative MP for Surrey Heath and was appointed Shadow Minister for Housing & Planning in David Cameron's shadow cabinet. He was Shadow Secretary of State for Children, Schools & Families from 2007. [10] He was re-elected as MP for Surrey Heath at the general election held on 6 May 2010. On 12 May he became Schools Secretary in the Conservative/Liberal Democrat coalition Government led by David Cameron.

Gove was moved to become Government Chief Whip in a reshuffle on 15 July 2014.[1]

Gove is married to Sarah Vine, who is a leader writer at The Times. [11]

Gove has been described as an 'unabashed neoconservative' [12] Former Conservative MP and now Times columnist Matthew Parris writes: 'If you had to identify what you might call Michael’s abiding passion in politics, you would find it in a consistent, intelligent rage against what he would see as the unwitting appeasement of wicked and violent men by flabby, woolly-minded liberals.' [13]

Gove was advocating total war in the Middle East even before September 11th. On the day of the attacks The Times published an article by Gove on the Israel-Palestine conflict. In the piece - written before the news of the attacks - Gove wrote: 'The talks which the West demands that Israel continues to hold with the Palestinian Authority will only confer further legitimacy on a terrorist state. It is not just that Arafat's territory harbours terrorists. It is terrorist. Militarily, culturally, spiritually. Just as much as any totalitarian regime from our dark continent's 20th century.' He continued: 'the truth about "talks" is that they are the product of violence, not its solvent. Munich was a reward for terror. Indeed the more "successful" talks are, the greater the legitimation for further violence. Once Sudetenland fell, who stood up for Prague?' [14]

A week later Gove wrote that, ‘What the West is dealing with, once more, is an ideological challenge to our existence and values.’ He rejected the use of diplomacy and called for ‘total war’. He continued:

Where should our steel be directed? It cannot, I fear, be deployed with the speed for which emotion pleads. But the swath we must cut is clear. First, the military eradication of bin Laden's headquarters and training camps. Next, the assembly of a coalition against the threat from his most dangerous accomplice, Saddam Hussein, and his weapons of mass destruction… [15]

In December 2008, Gove described the invasion of Iraq as a 'proper British foreign policy success'. 'Next year, while the world goes into recession,' Gove wrote, 'Iraq is likely to enjoy 10% GDP growth. Alone in the Arab Middle East, it is now a fully functioning democracy with a free press, properly contested elections and an independent judiciary. The two facts, the economic and the political, are of course connected.' [16]

Gove wrote a book on Islamism called Celsius 7/7, which was published by Weidenfeld & Nicolson in 2006. [17] Gove credited George Weidenfeld, a political commentator and the founder of Weidenfeld & Nicolson, as the inspiration for the book, writing: 'It was his idea that I should write a short work tackling head on much of the nonsense which had been spoken and written about terrorism in the last few years, and I am immensely grateful to him for that opportunity.' [18] In the book Gove argued that: 'there is a phenomenon called "Islamism", a totalitarian movement in the mould of fascism or communism, and which should be fought with the weapons of war'. [19]. The historian William Dalrymple said of the book: 'Gove is an ill-informed pundit tailoring information to fit pre-existing prejudices':

Gove is an example of the sort of pundit who has spoon-fed neocon mythologies to the British public for the past few years. Gove has never lived in the Middle East, indeed has barely set foot in a Muslim country. He has little knowledge of Islamic history, theology or culture — in Celsius 7/7, he just takes the line of Bernard Lewis on these matters; nor does he speak any Islamic language. None of this, however, has prevented his being billed, on his book’s dust-jacket, “one of Britain’s leading writers and thinkers on terrorism.

Gove's book is a confused epic of simplistic incomprehension, riddled with more factual errors and misconceptions than any other text I have come across in two decades of reviewing books on this subject. [20]

Gove credited a number of friends and colleagues who helped to shape his thinking in writing the book: 'I am particularly indebted to Dean Godson and Nicholas Boles of the think tank Policy Exchange, Dominic Cummings and James Frayne, formerly of the New Frontiers Foundation, Garvan Walshe and Glyn Gaskarth of the Conservative Research Department and the writers Simon Sebag Montefiore, Stephen Pollard, Oliver Kamm, William Shawcross and Douglas Murray.' [21]

On 5 December 2005, Gove criticised Home Secretary Charles Clarke for employing advisors on extremism including Ahmad Thompson, Khurshid Ahmad and Mockbul Ali. He later apologised after it emerged he had confused Khurshid Ahmad with another individual of the same name.[22]

In November 2009, Gove helped David Cameron to set up a question to the Prime Minister on Islamic extremism:

Seeing that two schools linked to Hizb ut Tahrir had received cash from the Early Years Pathfinder scheme which funds free nursery places, Mr Gove had mistakenly thought that it was part of the Preventing Violent Extremism pathfinder project that is supposed to tackle indoctrination. In fact the two schemes are entirely separate. The error meant that Mr Cameron was simply wrong to declare that the schools were receiving cash from an “anti-extremist” fund when he faced Mr Brown across the dispatch box.[23]

The Conservatives also claimed that the schools had not been registered or inspected by Ofsted:

In fact, one of the two schools – in Slough, Berkshire – had posted a glowing commendation from Ofsted on its website. The report was easily accessible by Googling the Islamic Shakhsiyah Foundation, and its veracity could be confirmed with Ofsted.[24]

According to the Independent, the blunder was said to have been "made by a researcher who put together a briefing paper ahead of Prime Minister's Questions":

But it also created deep embarrassment for Mr Gove, who is one of the Tory leader's most trusted advisers and confidants. He has been highlighting the case of the two schools for nearly a month; the rapid revelation of such a basic mistake leaves him with egg on his face.[25]

The Price of Peace

In the Summer of 2000, Gove published a pamphlet on Northern Ireland, called The Price of Peace for the Centre for Policy Studies. According to Ed Vaizey's review, Gove argued that "the peace process has taken us down a dangerous and erroneous path":

The solution, in Gove's eyes, is to abandon the peace process and substitute for it a strategy of "resolute security action"; the ending of prisoner releases; the banning of any party still associated with the principle of violence from participation in the peace process. More broadly, he shows the dangers inherent in appeasement. It is one thing to seek peace, another to put into effect methods of government that one would not contemplate elsewhere in one's country. Peace may be achieved in the short term, but at the price of the long-term infection of the body politic.[26]

On 9 February 2015, Gove attended the Conservative Party's 'Black and White Ball' election fundraiser at the Grosvenor Hotel in London. The event was attended by almost the entire Cabinet, Boris Johnson and George Osborne did not attend due to the G20 event, and by party donors including; hedge fund boss Stanley Fink (Lord Fink), who wants Britain to rival offshore tax havens with an equally generous tax regime; founder of Lycamobile, who paid no corporation tax between 2007 and 2014 despite generating millions in revenue, Subaskaran Allirajah; jewellery tycoon Ranbir Singh Suri and lap dancing club owner Peter Stringfellow.

To raise additional money at the event, the Party sold one off prizes. These included, dinner at home with Gove and his wife, shoe shopping with Theresa May, a meal at the Carlton Club with Sajid Javid and a session of jogging with Nicky Morgan.[27]

Gove received a donation to his constituency office from Annabel's nightclub, while it was owned by Mark Birley.[28]

Metals trader Alan Bekhor has also been a donor.[29]

On 2 June 2014 Gove declared in the MPs Register of Interests that he had been a guest of Lord Rothermere, owner of the Daily Mail newspaper, at his home in France the previous month.

Name of donor: Lord Rothermere
Address of donor: private
Amount of donation (or estimate of the probable value): travel, accommodation and subsistence to a value £2,134, for me and my wife as guests of Lord Rothermere.
Destination of visit: France
Date of visit: 3-4 May 2014
Purpose of visit: leisure (Registered 2 June 2014)