Media Smart is a 'media literacy' organisation funded by fast-food, media and toy industries. Its strong uptake in Britain has led to the programme being replicated and rolled out elsewhere. [1] Across Europe over three million children[1] in 73,000 primary schools are using Media Smart materials. More than 19,000 have requested them.[2] These programmes are supported by many powerful global companies including Microsoft, Nintendo, Hasbro and Nestle to name a few. 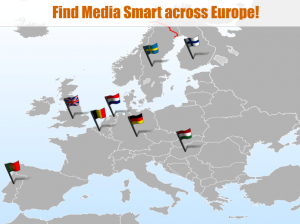 In the Netherlands Media Smart's initiative is Media Rakkers. It is supported by 36 leading global companies, largely from the food and drink industry. Media companies, including Microsoft and Nintendo, have also shown support, as has the Dutch Ministry of Education and the European Union. It has created two programmes to distribute information. These are Reklame Rakkers, an advertising literacy initiative, launched in 2005 and Media Makkers launched in 2006, which takes a more holistic approach to teaching media literacy.

The Expert Group consists of:

Comments from teachers using the resources

Media Smart was introduced in March 2007 and has enjoyed dramatic success.[1] [5] In Hungary 1195 of the country’s schools have signed up to the programme and a complementary website, Mediatutor has been set up with a range of resources.[1] Advertisers have donated cash and broadcasters have used pro bono airtime worth over £2 million to help develop the project further. [6]

Media Smart was launched in late 2006. It is not conducted as a commercial business but based on support from companies who welcome this initiative to finance, plan, produce and launch of educational materials free of charge for schools. The following companies support Media Smart financially in Sweden.

Media Smart ® "Pub-Be Evil!" is a media literacy material intended for children 8 to 12 years in primary education. The goal is to make every child able to understand advertising messages. It was launched in 2004 to help support media literacy.

Foreword by the Advertising Council:

'If we want children to understand the world they live in, it is essential to teach them to develop critical thinking over what they see and hear. Magazines, newspapers and radio, are excellent sources for learning, contain advertisements. On the way to school, children are confronted with many posters. When they go to the movies, the great film is preceded by commercials. At home, they discover the prospectus filed in the mailbox. On television, many commercials surround programs. And even on the Internet, advertising is increasingly present. Currently, most homes have a television that children watch an average of 2-3 hours per day. Almost half (44 per cent) of Belgian households have a computer with an Internet connection. [11]

In October 2005 the Council of Advertising, a tripartite organization representing the entire advertising industry, including advertisers, advertising agencies and media, decided to follow this initiative and Media Smart Belgium " under the slogan "Be Pub-Malin! This is the Belgian part of European material of awakening to the media advertising, aimed at children aged 8 to 12 years in primary education. [12]

New Zealand's Willy Munchright is a version of Media Smart, although it only focuses on identifying snack food products with too much fat and suggested alternative everyday snack foods (i.e. oranges, crackers, and frozen yoghurt) it also suggested cutting fat off the meat that you eat. However the advertisement still says that children can sometimes have the high fat snack foods after plenty of everyday foods. Another theme was “fat isn’t bad if you just have a tad”. There is a lack of objective aims for the programme and only general aims such as "to provides straightforward information to young people in a cartoon form which will encourage healthy eating and actions". It comprises a series of television advertisements, aired using donated television time, featuring an animated cartoon character promoting nutrition and healthy eating to children. [13]

The creation of consumerism around the world has influenced children to think about a ‘must have’ toy and ‘I've got to have it’. This behaviour is solicited by pressures from the media and their peers. It is disappointingly a common marketing occurrence. It is not surprising that these organisations are mostly funded by private sector companies. In the USA, the Media Smart Youth programme called "We can", is a national movement designed to teach 8 to 13 year olds to stay healthy. The programme has been implemented by many states. The programme was made available to the public in 2006. [14] Since its launch, it has been adopted by all 50 states and community sites, and in several parts around the world including the Arab World. [15]. In Canada 10 provinces have endorsed programmes aimed at advertising to young children. [16]

The shift to neoliberalism has increased the deregulation of companies to some extent, the reason being that regulation is now conducted to suit neoliberal policies. The same policies are enacted in the public’s name but increasingly without the public’s consent, thus they do not see the hidden messages attached in advertisements. In reality private interests supersedes children’s needs. This is done with the government‘s protection of corporate companies rather than popular inference. Neoliberal global capitalists market and the global commercial markets are closely linked. Thus they are a collective movement.

Media Smart has expanded around the globe on different continents. This could not have happened without the support of both the government and funders from each individual country. It has to be noted however that many funders, either financially or through contributions, are linked between the said countries. This can be linked to the ideology that international corporations have many different aspects of power. Without their contributions Media Smart would not have expanded at the rate it has.