Difference between revisions of "Maajid Nawaz" 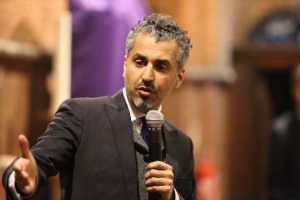 In October 2015, Nawaz signed a letter in The Guardian along with more than 150 people drawn from the arts and politics. The letter launched Culture for Coexistence, an organisation that opposes the Boycott, Divestment and Sanctions movement.[1]

In January 2015, Nawaz was among the signatories of a statement put together by the Gatestone Institute and published in the New York Times.[2]