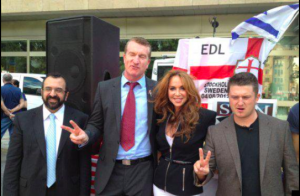 Kevin Carroll is the co-founder and one of the ex-leaders of the English Defence League. Also originating from Luton and Tommy Robinson's cousin [1], he resigned from his position with him over concerns of the 'dangers of far-right extremism'; a move allegedly 'facilitated' by the Quilliam Foundation, in October 2013. [2] An article published in the Huffington Post showed however, that their views of Islam apparently remain the same as that of the 'extremists' they fled. [1]

Like Robinson, he also stood trial on 16 October 2013 for allegedly attempting to defy a ban on marching to the scene of soldier Lee Rigby's killing in June 2013.

Carroll stood for the post of Bedfordshire's first-ever police and crime commissioner as the candidate for the British Freedom Party in October 2012. His British Freedom manifesto stated a policy of 'zero tolerance for extremist and terrorist activity in Bedfordshire', along with the promise to 'aggressively pursue so-called honour crimes' and to 'end politically correct two-tier policing' along with pledges to put the rights of victims of crime first and getting tough on drugs. [3] He lost with 10.6% of the votes (17.8% turnout). [4]

Carroll was convicted of committing a public order offense for shouting 'scum, scum, scum' at Muslim protesters during a soldiers' homecoming parade in March 2009. He and Bryan Kelso both received a nine-month conditional discharge and were ordered to pay costs of £175 each. [5]

Carroll was arrested in October 2012, along with 53 EDL men on suspicion of conspiracy to cause public nuisance with an operation in a London Mosque. One of the bail conditions imposed on the men banned them from entering east London to demonstrate for a stipulated period of time. [6]

Tommy Robinson and Carroll were accused of trying to defy a ban on marching from the East London Mosque to the scene of the murder of soldier Lee Rigby in Woolwich. The pair denied obstructing police near Aldgate East station on 29 June. The Crown Prosecution Service (CPS) said there was 'insufficient evidence' to proceed with the case, clearing them of these charges. [7]