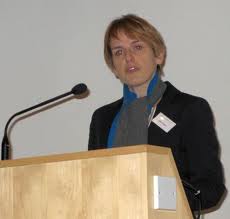 Juliet Tizzard is head of policy and communications at the Human Fertilisation and Embryology Authority (HFEA),[1] a non-departmental Government body which, amongst other things, licenses and monitors all human embryo research being conducted in the UK. She is associated with the libertarian and anti-environmentalist LM network. She was a columnist for Living Marxism and has written for Spiked [2] and the Institute of Ideas [3] and contributed to a publication of the Pro-Choice Forum.[4]

According to her LinkedIn page (November 2012), her background is as follows:[6]

Prior to joining the Progress Educational Trust, Tizzard appeared in the Channel 4 TV series Against Nature, which represented environmentalists as Nazis responsible for death and deprivation in the Third World, and argued that germline gene therapy and human cloning will liberate humanity from nature.

Subsequent investigations revealed that certain programme makers and several key contributors to the series, including Tizzard, had been closely involved with a magazine called LM.

Tizzard is part of the LM network which argued in 1994 'for interfering with nature at every opportunity in order to improve the human condition' via infertility treatment and genetic engineering.[7] LM's science editor John Gillott worked for the Genetic Interest Group which worked closely with PROGRESS. Both Gillott and Tizzard have been on the staff of the online clinical genetics resource Genepool.

As well as contributing articles to LM, Tizzard has also contributed to the LM network's later fronts: Spiked, and the Institute of Ideas (I of I). She also wrote a chapter for the I of I publication, Designer Babies: Where Should We Draw The Line?[8]

According to Tizzard, 'the continued attacks on genetics in agriculture and - more worryingly - the promotion of negative attitudes even towards research may start to have their impact on applications of genetics in human medicine.'[9]

Tizzard appears to regard 'spin' as a valid way of overcoming public concerns, 'Three cheers for PPL Therapeutics! Not for their success in cloning pigs (although this is worth at least three cheers), but for their success with the media coverage of those five little piggies. Press coverage in the United Kingdom of the cloned pigs was almost universally positive... Perhaps PPL Therapeutics is just good at media spin. But maybe media spin isn't such a bad thing in science... those who raise concerns about science - whether environmental groups worried about GM crops, or church leaders worried about genetic testing - seem to have no lack of confidence about their own position. In fact, their approach to media relations often reeks of astounding arrogance. So, perhaps instead of spin doctors, what we need is spin scientists!'[10]