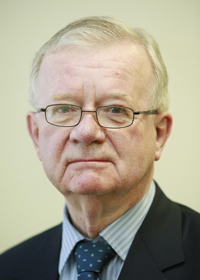 Sir John Chilcot (1939-) is the chairman of the Iraq Inquiry which was announced by Gordon Brown in June 2009 and began work a month later.[1]

Chilcot was educated at Brighton College, and Pembroke College, Cambridge where he read English, and Modern and Medieval Languages.[2]

Chilcot occupied the following posts during his Civil Service career:

Chilcot was Permanent Secretary of the Northern Ireland Office from 1990 until his retirement in 1997.[4]

This role put Chilcot at the heart of security and intelligence as well as political affairs. He was closely associated with the secret contacts with the IRA and Sinn Féin and the Government's policy of denying they were taking place.[5]

Peter Brooke has said he re-opened a back-channel with republicans in 1990, after discussing the issue with Chilcot and John Deverell.[6]

He has described how the then head of MI5 in Belfast, John Deverell, asked his advice after receiving a message, purporting to come from Martin McGuinness of Sinn Fein, which said: "The conflict is over but we need your advice on how to bring it to a close."

Sir John said he had been able to reassure the then Prime Minister, John Major, that the message was authentic.[7]

According to Jonathan Powell it was in 1991 that the link was opened:

On returning to London, Oatley went to see John Chilcott, the new permanent secretary of the NIO, and told him he had opened a channel to Martin McGuinness who was ready to discuss a political way forward. Chilcott said he would consider how to proceed.[8]

In the summer of 1992, John Hume discussed his own secret talks with republicans with Chilcot.[9] According to Jonathan Powell, Hume handed Chilcot a version of the document he had been negotiating with Gerry Adams:

It only took one look at the document for Chilcott to be clear it was unacceptable to the British government, (it demanded, for example, a date for British withdrawl from Northern Ireland)[10].

According to republican records of the back-channel, Chilcot supported a May 1993 proposal for talks with republicans within a week of an IRA cessation.

The timetable agenda was agreed by Chilcot and Mayhew. That is cessation followed with 1-7 days by logistics, followed by delegates meeting. It was the intention to put this to Major on Monday 17th May. Present at the meeting were Major, Hurd, Mayhew, Chilcot, Braithwaite, and two other names which appeared to be secretaries or similar.[11]

According to republicans, this account was given to their contact by the British representative to the back-channel, who insisted that he had faithfully acted on instructions from Chilcot but that the Cabinet was now seeking a slower timetable.[12]

McKittrick and Eamon Mallie note of this episode:

This account of the inner workings of a Cabinet committee may represent an extraordinary indiscretion on the part of the British representative, or the account may simply have been fabricated to mislead Sinn Féin.[13]

In the summer of 1993, Chilcot and Robin Butler represented London in talks with Dublin on the Hume-Adams declaration.[14]

During a rocky stage in the peace process in later 1993, Dublin sources regarded Chilcot and his deputy, Quentin Thomas as sympathetic to the intiative, but were more critical of others, including Roderic Lyne, David Blatherwick, and Northern Ireland Secretary Sir Patrick Mayhew.[15]

In November 1993, Chilcot authorised a statement describing allegations of back-channel negotiations with the IRA as a 'fantasy.' When the Observer produced evidence of such allegations shortly afterwards, he rang the paper to put the best gloss on the news.[16]

According to Mallie and McKittrick, Chilcot was optimistic about progress in the wake of the December 1993 Downing Street Declaration:

There is some evidence of difering opinions between the NIO and othere government departments, with the suggestion that Chilcot and Thomas had considerably more hope for the Downing Street declaration than did Mayhew, their political master.[17]

According to Dean Godson, Chilcot took part in a 'preparing for Government' meeting with Tony Blair at the Travellers Club in late 1996.[18] Jonathan Powell places a similar dinner at the beginning of 1997.[19]

The Iraq Inquiry website lists a number of inquiries and reviews to which Chilcot was appointed following his retirement:

including the Independent Commission on the Voting System (1997-8), the Lord Chancellor’s Advisory Council on Public Records and its successor National Archives Council (1999-04), a review of Royal and VIP security, an inquiry into the IRA break-in at the PSNI Special Branch HQ (2002), and the Review of the Intelligence on Weapons of Mass Destruction by a Committee of Privy Counsellors, chaired by Lord Butler, (2004).[20]

After Chilcot was appointed to head the inquiry into the Castlereagh break-in in 2002, the deputy chairman of the Policing Board, Denis Bradley questioned whether his links with the intelligence services provided the right image for the inquiry.[21]

There has, over the months, been a significant degree of speculation about who might have been involved in this incident, including allegations of collusion. I can confirm that the review did not uncover any evidence whatsoever that members of Government agencies were in any way involved in this incident, although the police investigation is continuing. The review was also able to provide a satisfactory assurance about the quality of the police investigation, confirming the conclusions of a separate review of the professional quality and standard of the investigation, carried out by the Metropolitan Police Service last year at the request of the Police Service of Northern Ireland.

The report came to certain conclusions about how the incident might have occurred and made recommendations about how to avoid any similar incidents happening in the future. I am sure that the House will recognise that I am constrained by the wider aspects and implications of national security from going into any details on these matters. But I shall be considering the matters raised in the report with the greatest care.[22]

Following his appointment to chair the Iraq Inquiry in June 2009, Richard Norton-Taylor reported that Chilcot was "one of those former mandarins a government can rely on as a safe pair of hands."

Phillipe Sands QC, the international lawyer who closely followed the Butler review, said yesterday: "Having some familiarity with Sir John's questioning ... it is not immediately apparent that he will have the backbone to take on former government ministers".[23]

Although the Prime Minister had initially announced the inquiry would take place in private, Chilcot wrote to him arguing that it was "essential to hold as much of the proceedings of the inquiry as possible in public, consistent with the need to protect national security and to ensure and enable complete candour in the oral and written evidence from witnesses.”[24]

Chilcot was Staff Counsellor to the Security and Intelligence Agencies (1999-2004) and the National Criminal Intelligence Service (2002-06).[25]