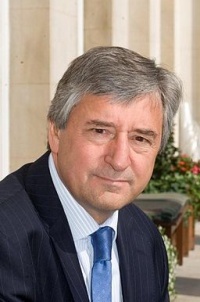 Fitzpatrick was appointed a shadow transport minister in 2010.[2] He resigned from this position in August 2013, in order to vote against a Labour amendment to a Government motion on Syria in the House of Commons, stating he was "opposed to military intervention in Syria, full stop".[3]

He is a vice chair on the All-Party Parliamentary Group on Unconventional Oil and Gas. [4]

He is a former Labour minister for Defra.

Fracking protesters are in denial of the science let alone the economic benefits locally and nationally. Public Health England say it's ok. [5]

Commenting on Labour's tabled amendments to the Infrastructure Bill in January 2015, he said:

'With eight of ten homes still reliant on gas for heating, shale gas may have a role in improving our energy supply and reducing carbon emissions in the future. But I know many people in Poplar and Limehouse have serious concerns about the environmental and safety implications of fracking. Labour have always said that shale gas development cannot go ahead unless there is a robust regulatory regime in place. But the Tories and Lib Dems repeatedly ignored people’s genuine and legitimate concerns over shale gas and seemed prepared to plough on at any cost.' [6]

In a debate in the House of Commons on transport and local infrastructure in May 2016, Fitzpatrick stated:

'There is a real conflict for local councils that have the prospect of shale extraction and fracking. Notwithstanding the clamour from the environmental movement and the Greens for shale extraction not to be proceeded with, I think the vast majority of people in the country would much rather that we use our own natural resources than import gas from the US, Qatar or Russia. Shale extraction makes much more sense for our economic security, but the Government have to address the conflict between local communities being panicked and scaremongered into opposing shale extraction applications and the need for that national industry to be developed.' [7]

Fitzpatrick has served as vice chair to the All-Party Parliamentary Group on Unconventional Oil and Gas since July 2015.

Fitzpatrick has voted a mixture of for and against increased regulation on fracking. [8]