Difference between revisions of "Jeremy Hunt" 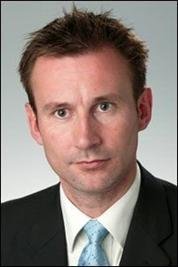 Jeremy Hunt has been the Conservative Party member of Parliament (MP) for Surrey South West since 2005 and was appointed Secretary of State for Health in September 2012.[1]

Hunt was previously appointed Secretary of State for Culture, Media, and Sport in the incoming coalition government in May 2010.[2]

On 29 October 2008, POLIS and Hanover Communications was due to host a talk by Hunt on the nature of public broadcasting.[3]

On 15 May 2008, Hunt received a donation from John Lewis of Dorset. on 15-20 August 2008, he was funded by Lewis to attend the Olympic Games in Beijing. On 17 June 2009, Lewis paid £800 for Hunt to attend the Conservative Party's Summer Party. On 22 September 2009 he received a donation of £5,000 from Daisy Lewis. Hunt used a donation from John Lewis to visit New York from 30 August to 4 September 2009; where he met with representatives of News Corp (including Wall Street Journal), Fox Five and WNET. On 11 May 2012, the Groucho Club donated the £1,435 cost of a networking event to enable Hunt and Ed Vaizey to meet 'sector leaders from the arts and creative industries'.[4]

A seating plan of the Conservative Party's Black and White Ball, in February 2014, was leaked to the Bureau of Investigative Journalism in October 2014. The party, which guests pay between £450 and £1000 for a ticket, seats diners with the minister most relevant to them. It revealed that Hunt sat with Peter de Putron, an offshore financier and Jersey’s Treasury minister, Philip Ouzouf. [7]