Google Ngram of mentions of Islamism, Islamist, Jihadist, Jihadi and Islamic terrorism in English books from 1800 to 2020

On of the earliest articles of note was by Bernard Lewis a 'renowned British-American historian of Islam and the Middle East. A former British intelligence officer, Foreign Office staffer, and Princeton University professor, Lewis was the author of some three-dozen books about the Middle East.'[1]

In January 1976 he published a piece in the Zionist/Neoconservative magazine Commentary, which at that stage was still published by the American Jewish Committee. Titled 'The return of Islam' it raised the spectre of 'new forms of pan-Islamic activity.'[2] It sets out to insist that the problem with Islam is that it is a religion. Thus he chides the West for not understanding that Muslims are not like us. 'We are prepared' he states 'to allow religiously defined conflicts to accredited eccentrics like the Northern Irish, but to admit that an entire civilization can have religion as its primary loyalty is too much.'[2] 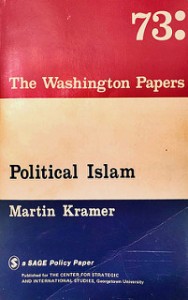 Terminology for the phenomena characterized as Political Islam varies among scholars. The first scholar to introduce the term Political Islam was Martin Kramer in 1980. Some scholars use the term Islamism for the same set of phenomena, or use the two terms interchangeably. Dekmejian 1980 was among the first to place the politicization of Islam in the context of the failures of secular governments, although he uses the terms Islamism and fundamentalism (rather than Political Islam) interchangeably. Dekmejian 1995, still using fundamentalism and Islamism, is an influential treatment of Political Islam as increasingly mainstream and moderate. Some scholars, using descriptive terms such as conservative, progressive, militant, radical, or jihadist, distinguish among ideological strains of Political Islam.[3]