International Center for the Study of Terrorism

The International Center for the Study of Terrorism (ICST) is a terrorism research centre based in the Department of Psychology at Pennsylvania State University, but affiliated with a number of research universities in Britain and the United States. 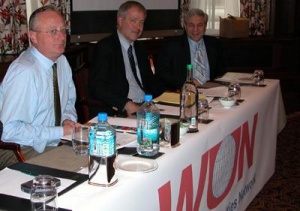 According to the ICST’s website the Center was formally launched at a meeting of US and UK security experts in London on 20 May 2006.[1] This description is somewhat misleading since it would seem from other sources that the conference in question was the annual meeting of the Worldwide Universities Network. As the photo on the left shows, present at the launch was Graham Spanier, President of The Pennsylvania State University, Eric Thomas chair of the Worldwide Universities Network and Vice Chancellor of the University of Bristol, and Kevin Murphy who became the Center’s first Director. A press release suggests that Murphy was the main driving force behind putting ICST together:

In 2003, thinking about ways to improve the quality of the science in the field of terrorism and counterterrorism, Murphy began putting together a team of psychologists, sociologists, political scientists, religion scholars and historians from Penn State and numerous other institutions, with the aim of creating a multidisciplinary center.[2]

A year before his brainwave, Kevin Murphy had assisted the US Marine Corps in evaluating and enhancing its recruitment process.[3]

On 1 November 2007 John Horgan, a Research Fellow at the Centre for the Study of Terrorism and Political Violence became the ICST’s new director.[4]

A preoccupation of the Center seems to be what it calls ‘actionable knowledge’; in other words scholarly and scientific research that can serve the state and corporate ‘national security’ agenda. ICST’s website currently provides the following summary of its activites:

At the time of the launch the ICST stated that in addition to Penn State, the following institutions were involved: