Difference between revisions of "Ian Russell" 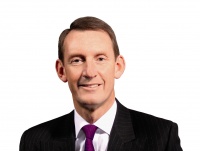 Until 2006, Ian was Chief Executive of Scottish Power plc having been appointed to this position in April 2001. He joined as Finance Director in April 1994 and became Deputy Chief Executive in November 1998.

In 2004 and 2005, Ian chaired the Russell Commission review on youth volunteering for the Chancellor and Home Secretary.

Prior to joining Scottish Power, he held a number of financial positions at HSBC and Mars Ltd, among others.

He is a Non-Executive Director on a number of boards, including Business in the Community, and chairs a private equity management company. He is also Chair of the Fundraising Board of University of Edinburgh.[2]

Ian is also a member of the Institute of Chartered Accountants of Scotland, having trained with Thomson McLintock. He serves on the Council of Edinburgh International Festival and the Scottish Council of the Prince's Trust. [3]

In September of 2005, Mr. Russell was faced with a growing threat from the stock market as Scottish Power's shares had recently soared causing rumours of its German rival, and owner of Powergen, E.ON wanting to buy the company. After meeting with the chairman, Charles Miller Smith, and the finance director, Simon Lowth, it was decided that a major restructuring had to take place - one that involved getting rid of two of his top executives - David Nish and Charles Berry. Along with these sackings, the human resources director, Mike Pittman, and the communications chief, Dominic Fry were dismissed as well. Mr. Russell's explanation referred back to late May when Scottish Power announced the £5.1 billion sale of its giant US business PacifiCorp to the world-famous entrepreneur Warren Buffet. PacifiCorp was responsible for two-thirds of Scottish Power's valuation, which meant that the company would become much smaller when the deal went through. The idea of the restructuring was to slim down the group - stripping out the four directors in the process - preparing it for life as a smaller, independent, predominantly UK-based utility. However, Mr. Russell did not mention that the group's smaller size was what had attracted E.ON's attention or that the downsizing was threatening the independence of one of Scotland's biggest companies. To this day, Mr. Russell has yet to publicly link the two events - despite the asking of questions in parliament. Neither did he bring up the £9 million in shares, pension payments and other incentives he could make from a deal. Later that same day, E.ON confirmed that it was considering its options regarding a possible takeover of Scottish Power.

Since David Nish was most likely to succeed Ian's position, the group's head of infrastructure, finance director and Mr. Russell's right-hand man was most surprised with his dismissal.

Few at the company could quite understand how Scottish Power had gone from Scotland's third biggest listed firm to one fearing for its independence and willing to sack half its board at the same time.

The answers to this question are to be found in the company's not-so-distant past, at the time of the acquisition of PacifiCorp in 1999. Mr. Russell was not the chief executive at the time but, as finance director, he played a huge part in the move. It transformed the firm from a UK-based player to a behemoth straddling the Atlantic, and the group paid $10 billion for the privilege.

But the adventure proved disastrous. Following nearly six years of calamities and unmet expectations, Mr. Russell sold out at $9.4 billion. The total loss worked out over the years at about £442 million. It left the smaller group vulnerable to a takeover from rivals at home and overseas, and facing an uncertain future. [4]

Mr. Russell, who left in January of 2006 after five years as chief executive, received a £2.3m compensation payment as well as benefiting from a resultant pension top-up of £2.7m. The compensation sum is more than three times his salary of £648,000, while his pension windfall nearly doubled his total entitlement to £6.8m. [5]