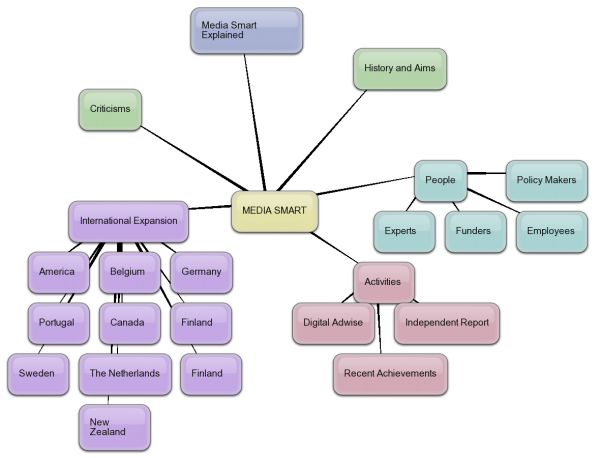 We aim to investigate and analyse the purpose of Media Smart and the impact it has on children. By looking at various areas, we hope to find out exactly what type of organisation Media Smart is and whether it is a positive or negative one. We will look at the history of the organisation to get some background knowledge and at the people involved in running, organising and funding the group. We will also look at the activities that Media Smart take part in and promote and finally, the international expansion of the group i.e. what they are doing in other countries. Our hope is by looking at these areas in detail, we will be able to get a fuller understanding of the Media Smart group and what their aims are. 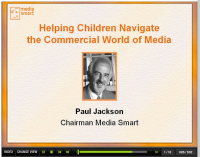 Media Smart is an organisation funded by fast-food, media and toy industries. Its website states it is a

"non profit media literacy programme for school children aged 6 to 11 years old, focused on advertising. Media Smart develops and provides, free of charge and on request, educational materials to primary schools that teach children to think critically about advertising in the context of their daily lives. Our materials use real examples of advertising to teach core media literacy skills." [1]

The history of Media Smart can be traced back to the Canadian organisation, "Concerned Children's Advertisers," (CCA). [2] This section on History and Aims will analyse CCA and it's connection with Media Smart UK.

Media Smart does not name its employees on its website. Their Director is Paul Jackson, also known as the Chairman. He has an extensive history of working within the media industry. An example of this is, in 2005 alone, Jackson was recorded as:

Media Smart has an Expert Group (as of November 2008) which has not changed considerably over the previous 8 years. Media Smarts Expert group includes a range of academics and experts in education, media and Government officials form the regulator group Ofcom and the Advertising association, both evoke the standards and excellence of the academics and experts needed to run such successful companies. Without the research agencies they would be at a standstill and would not be able to plan projects in the future and ensure their goal of promoting media literacy continues to develop. In this section we will look at Media Smart and Their relationship with academics and what they need them for.

Media Smart also has a number of supporters or Funders who take an active roll in making sure they have their voices heard by the panel when continuing the research in which the company is based. These companies also play a key part in implementing media smarts ideas and policies into their own products.

It's policy makers are the UK and EU Governments. They support Media Smart’s aims – “to teach children to think critically about advertising in the context of their daily lives” [4] – and will inevitably have some say in what happens within the literacy programme. Media Smart is also funded by the advertising businesses in the UK, so they will no doubt have some amount of input and influence over it too.

Media Smart seems to have a good relationship with its policy makers. They speak very highly of the work that Media Smart does and believe it is a positive programme for young children. Lord McIntosh, The Minister for Media and Heritage, said that:

“Media Smart’s work helps children to deal with the complex messages of advertising in a critical way and the government welcomes the advertising industry’s initiative to take a responsible role in this. I believe Media Smart’s work plays a valuable role in equipping children with the tools to make informed choices about their viewing, and to effectively use, interpret and understand what they are viewing.” [5]

He clearly approves of the work done my Media Smart and this suggests that he is speaking on behalf of other politicians. They being the policy makers, obviously agree with Media Smart's aims and objectives and therefore, it would seem that their relationship is strong and positive.

Furthermore, Tessa Jowell - the UK Secretary of State for Culture, Media and Sport - stated that;

“Media Smart acknowledges the power of advertising and attempts to empower the consumer. And it is an example of an industry taking responsibility for its own actions. It is enlightened self-interest.” [6]

Again, this shows the positivity that the policy makers have for Media Smart. They feel strongly that it is a beneficial programme that will be a great advantage to many young children in the UK.

It is fair to say that Media Smart appear to have a strong, encouraging relationship with their policy makers. There are many more positive comments on the organisations website suggesting that it is a successful, reliable programme.

In 2006, Media Smart commissioned an independent evaluation of their BeAdwise 2 teaching materials from The Centre for the Study of Children, Youth and Media, Institute of Education, University of London. In 2007, the centre produced their independent report.

The authors of the report were:

Buckingham and Willet are both members of Media Smart's expert group. The overall conclusions of the report were positive. [7]

Media Smart has made much progress since its launch in 2002.

More Recently, Media Smart have created, and are now connected to Digital Adwise which is a set of online lessons intended to teach children about digital content in a fun and engaging way. [9]

More details on Digital Adwise can be found on Media Smart: Activities

The emergence of commercial globalisation has had an impact on children around the world. Many people from all walks of life take part in the global force of commercial interest. This results into a standardised effect at both local and international level. Children’s media products, television programs, games and advertising makes it lucrative for the dominant companies. Nowadays, children are exposed to irresponsible advertising. Most youth's use the internet and television that makes them the target for the merchandising vehicle to international expansion. For example, The Disney channel is one of the global children's television. Dominant companies should have responsibilities and commitments to children’s welfare.

Article 17 of the Convention of Rights of a Child should be a paramount concern to advertisers to protect children from material that is injurious to their well being. [10]

The Media Smart Group has expanded to other parts of Europe. Most of the European Schools are using Media Smart educational material in their Primary Schools e.g. in Belgium, Finland, Germany, Hungary, The Netherlands, Sweden and Portugal.

Publically published articles mainly support Media Smarts project insisting that the organisation can do no wrong. The studies conducted by Media Smart claims that 91% of teachers support the programme. However, what it fails to acknowledge is the fact that some teachers thought that the programme produced mixed results within the classroom. These following quotes indicate such accusations:

These statements indicate that despite Media Smart and Digital Adwise consistantly resourcing to produce better teaching materials it is not always working in the classroom.

There are also criticism's of the Willie Munchright programme in New Zealand which has the same concept as Media Smart, the main criticism being - there has been no attempt to empirically measure the effects of the programme, which it's opponents use to their advantage by asserting (without offering evidence to support their own stance) that it has had little impact and is nothing more than a public relations campaign on behalf of the food industry. [11]

The purpose of Media Smart is to increase the awareness of young peoples understanding of the media and its advertising content. Since its launch in 2002, it has had a relatively large impact on children and their education. In the UK, around one million children have been taught using their materials; fifty percent of children know about Media Smart and it aims to expand more.

Overall, It has been recognised as a positive organisation. This is highlighted with its relationship with its policy makers, the rate of expansion throughout the world and the companies progress within the education department. However, it’s main criticism is its funders, for example, it is connected to the fast-food industry and the likes of McDonald’s show that the organisation can be hypocritical as it is trying to curb childhood obesity.

We have looked at various aspects of Media Smart, including the history of the organisation and gained background knowledge through the Canadian organisation, ‘Concerned Children’s Advertiser’s’. We have looked at the main people involved in running, organising and funding the group and also the activities that Media Smart take part in and promote, inparticular Digital Adwise. We have found that through their International expansion it is evident that they are a market driven corporate movement in a global capitalist market. Marketing industries are claiming to be part of the solution in media exposure to young children, thereby they seek to avoid restrictions and bans on marketing communications, this is exploitation by both parties. The aim of Media Smart is to make children more sceptical of commercial messages however advertisers also seem to be benefiting from this. Thus adverts represent fantasies about brand products; therefore children develop a positive attitude towards the product.By looking at these areas in detail we have gained a better understanding of the Media Smart group and what their aims are.