Difference between revisions of "George Hollingbery" 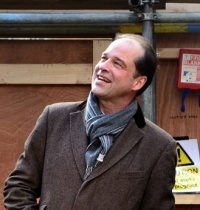 George Hollingbery is parliamentary private secretary to Theresa May, the UK Home Secretary. He is the Conservative Party member of parliament for Meon Valley in Hampshire having retained his seat in the 2015 general election with a majority of 23,913. [1]

On 11 May 2015, Hollingbery was appointed as Government Whip (Lord Commissioner to HM Treasury).[2]

In August 2013 Hollingbery became the first senior Tory to openly attack the process of fracking, just weeks after the Prime Minister David Cameron demanded that UK citizens must accept it for the good of the country.

Hollingbery has 'warned that gas fracking could be “disastrous” in his county because of the area’s fragile water supply' and that he 'will be “manning the barricades” if there is any danger posed to water supplies by shale gas exploration'. The MP told The Telegraph newspaper:

There is lots to learn and I want to know more before I make any decision on this. I am very, very concerned about water quality in Hampshire and water quality generally. I’m raising concerns because there are concerns that need to be met – there’s no question about that. But I’m not an expert and I do want to know a great deal more before I plump either way … if there ever is any application in our area which of course isn’t certain. [3]

A seating plan of the Conservative Party's Black and White Ball, in February 2014, was leaked to the Guardian in October 2014. The party, which guests pay between £450 and £1000 for a ticket, seats diners with the minister most relevant to them. The report revealed Hollingbery sat at the same table as Iain Duncan Smith who "was seated with directors of the doorstep lending firm CLC Finance, which advertises loans at a 769.9% annual interest rate." Two of the directors of CLC who sat with Hollingbery and Duncan Smith, Philip Wilbraham and Dominic Wilbraham, are also members of Wilbraham Securities LLP. The firm have given £28,500 to the Tories over the past three years, with the donations beginning in 2011, coinciding with when pressure started to mount on the government for tighter regulation in the high-cost credit market. It is said that Hollingbery "has a particular interest in work and pensions and welfare legislation".[4]