Difference between revisions of "Fracknation" 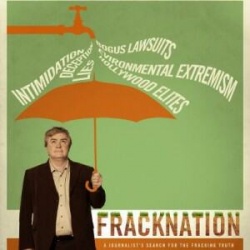 FrackNation is a pro-fracking documentary made by directors Phelim McAleer and Ann McElhinney and Magdalena Segieda. Touted as 'a journalist's search for the fracking truth', it claims to address 'misinformation' about the process of hydraulic fracturing, commonly called fracking. Its release was timed to coincide with the release of Gasland 2, an HBO-funded sequel to filmmaker Josh Fox's critique of the fracking industry.

Their past films include Not Evil Just Wrong, which challenges Al Gore's film An Inconvenient Truth by suggesting that the evidence of global warming is inconclusive and that the impact global-warming legislation will have on industry is much more harmful to humans than beneficial.

Another film, Mine Your Own Business (2006), focusing on protests against a proposed large-scale open-pit goldmine project in Romania, was billed as 'the world's first anti-environmentalist documentary'. Gabriel Resources, the Canadian mining company behind the project, partly financed the filmakers, who also travelled to Madagascar and Chile where international environmental groups oppose planned mining operations. The New York Times reported that the film 'portrays environmentalists as condescending elitists while impoverished locals insist they would welcome the jobs and development the mines would bring'. [2]

One backer who pledged $5,000 or more was offered an additional 'a special thank you phone call from the Directors where you will be thanked for your generous support of our film and talk about whatever you want during the call'.[4]

Questions were raised over the independence of some those who donated money: they reportedly included 'the director of an Ohio-based oil and gas outreach program and the head of external affairs at Cabot Oil and Gas, a company that's fought accusations of water contamination in Dimock, Pa., for the past several years'. As the Pittsburgh Post-Gazette explained,

[T]he roster of "executive producers" who have donated at least $1 includes scores of energy industry associates. The filmmakers said Thursday they plan to return any donations given by "senior" workers in the industry, which they define as executives. [5]

The Kickstarter campaign was promoted by pro-industry lobbying groups Energy in Depth and the Marcellus Shale Coalition. [5]