Frédéric Encel is a Middle East expert and author who also works in risk analysis. He was an expert at the London based organisation [[Réalité EU], a front group for the US based Israel Project.

Encel graduated from Science Po (Institut d'Études Politiques de Paris) in 1992 and then studied a PhD in geopolitics under the direction of Yves Lacoste at the University of Paris VIII. His thesis was submitted in 1997. [1] He teaches International Relations at the International Institute of Public Administration and at the Institute of Political Studies in Rennes. [2]

The French monthly newspaper Le Monde Diplomatique describes an academic symposium held in Nice in late 2001 which was supposed to ‘discuss rationality and emotion in the media,’ but ‘seemed more like a kangaroo court’. According to the article a number of academics and journalists were attacked for criticising Israel by Frédéric Encel and other right-wing Zionists:

[T]he accused were two journalists from the French Press Agency (AFP), a former Liberation correspondent in Jerusalem, a journalist on Le Monde diplomatique, and a couple of university lecturers, almost all of whom were Jewish. Their main accuser was a self-styled ‘geopolitician and expert on the Islamic world’, Alexandre Del Valle, who was supported by two academics, Frederic Encel and Jacques Tarnero, and Maurice Szafran, who is editor-in-chief of the weekly magazine Marianne. De Valle and his assistants were backed by the city's Jewish organisations. [3]

The website of the Israeli Zionist organisation Keren Hayesod - United Israel Appeal, describes a fundraising event for the French Jewish organisation the Appel Unifié Juif de France (AUJF) which was held at the Pavillon d’Armenonville in Paris on 26 March 2009. Frédéric Encel was the 'guest of honour' at the event along with Israel’s Ambassador to France, Daniel Shek. Encel gave what was described as an 'intensely emotional speech' and 'explained that through its strength and its army, Israel has managed to find peace with its most powerful neighbor, Egypt, and that despite many ups and downs, this peace has never been denied.' Making reference to Israel's recent assault on Gaza, which resulted in an estimated 1,387 Palestinians deaths [4] and widespread destruction of Palestinians homes, Encel stated that, ‘the Hamas party’s way of making things worse to further their own ends has obliged Israel to use its force.’ He added that the IDF conducting its attacks whilst ‘maintaining a control that is rarely seen in other armies.’ [5] 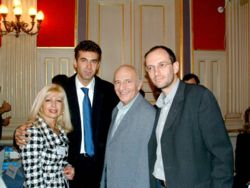 Though not ideological enough for Daniel Pipes – who has criticised Encel’s book on the Golan Heights for attributing ‘little difference between the motives and methods of democracies and those of totalitarian regimes’[6] – Encel holds views typical of the neoconservatives and the pro-war liberals. He sees himself as defending a Western liberal tradition against a sinister alliance of Islamists and leftists. He says on his official website that he is in favour of a ‘fierce defence of republican values,’ which he considers to be under attack by what he labels as totalitarianism, fascism, radical Islam and Stalinism. [7] His worldview is reminiscent of the ‘anti-totalitarianism’ of French intellectuals like Bernard-Henri Lévy and André Glucksmann. However, it is probably closest to the French-Italian intellectual Alexandre del Valle, who has written of a supposed ‘Convergence of Totalitarianisms,’ which he terms the ‘Red-Green-Brown Axis’. This he explains is, ‘the Red of the extreme left, the Brown of the extreme right, and the Green of Islamism’. [8]