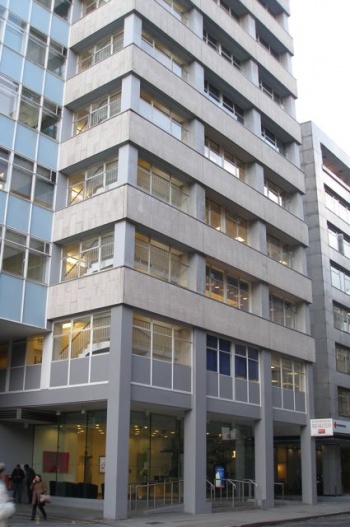 Finsbury was founded in London in October 1994 and in 2001 was taken over to become part of the WPP group. Finsbury was 75 percent owned by Roland Rudd, who made £41 million by selling the company. Another two Directors, Rupert Younger and James Murgatroyd shared another £14 million between them from the sale.[2] Finsbury's work on EU political & regulatory issues is done via Finsbury International Policy & Regulatory Advisors.

Rudd is founding Chairman of campaigning group, Business for New Europe (BNE), which wants Britain to play a leading role inside the EU - reforming it to meet business interests and needs, and expansion to include Turkey. Sir Nigel Rudd (no relation), Chair of BAA from August 2007, and Roger Carr, who went on to chair Centrica - two of Finsbury's most productive supporters - are on BNE's advisory board. Martin Sorrell, head of owners WPP also sits on the BNE advisory group. "Rudd and Sorrell like to think they're plugged in, they exchange gossip", it is reported. On BNE Rudd says: "I enjoy it enormously because it enables me to engage with Ed [Balls], with George Osborne on the Tory side and Chris Huhne and Nick Clegg from the Lib Dems."[7]

Finsbury has close ties to New Labour through its founder Roland Rudd. For example, Rudd is friends with Peter Mandelson and Ed Balls, a close confident of Gordon Brown. Rudd says: "I've a very good relationship with Ed (Balls) - he's been a friend from FT days". He also knows David Cameron, who was a client when Cameron was at Carlton: "He came to dinner with our clients recently (2007). I was pleased - it showed he's not tribal," says Rudd.[8] It's reported that Rudd has "finely honed social and political connections":

Dinners at his grand house in Kensington are relaxed, informal occasions. Sophie [his wife], who designs women's eveningwear, will be there. The guests will include a client or two, heads of large companies, a top banker, a senior journalist and a Cabinet minister and their other halves. Even Tony Blair has supped at his table. Rudd was one of four people who met at the house of Charles Dunstone, the Carphone Warehouse magnate, to plot the ex-PM's next move in the run-up to Blair's departure."[9]

Rudd also held a garden party on 28 June 2007 to raise funds for the NSPCC.[10] Present were retailer Sir Philip Green, owner of Arcadia (Topshop, Burton and others), Paul Dacre, editor of the Daily Mail and Paul Myners, former chairman of Marks & Spencer who was appointed Financial Services Secretary (a position sometimes referred to as City Minister) in HM Treasury by Prime Minister Gordon Brown in October 2008. Baron Myners was given a peerage at the same time.

Conservative London Mayor Boris Johnson was also a guest of Rudd's. He flew home from the 2009 World Economic Forum in Davos in February on Rudd's private jet.[11] In addition:

Finsbury has regular discussions with government. In response to Parliamentary questions in 2008-09, it is known that Rudd, often through the BNE, organised 4 breakfast meetings, two dinners, and a number of conferences with senior Ministers at the Department for Business in 2008:[13]

Finsbury claims to count more than 20 FTSE 100 and Eurofirst 300 companies as clients.[18]

Peston also notes than Stuart Rose at Marks & Spencer ditched its usual PR firm, Brunswick in favour of an old friend Andrew Grant of Tulchan Communications. Philip Green, he reports, also holds Brunswick responsible for the negative publicity he faced when Green's wife purchased shares in Marks and Spencer at a previous time when Green tried to buy the company.[20]

Finsbury's big name clients in the financial sector include Lloyds TSB (PR only; Lloyd's lobbying is done by Citigate Dewe Rogerson[21]), private equity giant, KKR (PR and lobbying)[22] and Bradford and Bingley. In April 2011 Wonga, an online lender that charges interest rates of more than 2,600% a year became a client. [23] Two months before this client was signed Robin Walker MP and part-time Finsbury consultant tabled an amendment to a bill which sought to cap interest rates on unsecured lending. [24]

Lobbying clients in 2009, according to the Finsbury website include:[28]