Difference between revisions of "Eric Moonman" 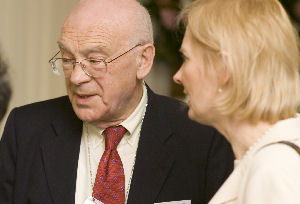 Eric Moonman (born 29 April 1929) is a former Labour MP, turned academic, broadcaster and Israel lobbyist. More recently he has emerged as a security and counter terrorism expert on UK commercial television and local press. He is invariably identified as a ‘terrorism expert’ without mention of his Zionist affiliations. Moonman writes a weekly column on the media for Totallyjewish.com.

Eric Moonman was born in Liverpool on 29 April 1929 to Borach and Leah Moonman.[3] He went to Rathbone School in Liverpool which he left at the age of 13 to start a seven-year apprenticeship at WJ Pugh Printers and then the Liverpool Echo. [4] After the war, Moonman undertook his national service in the Kings Liverpool Regiment from 1951 to 53, during which he took courses in military studies as well as evening classes in subjects such as public speaking. In 1954 got a place at the University of Liverpool to study for a Diploma in Social Science. At Liverpool he edited the University magazine and became chairman of the Labour Society. Moonman was awarded his diploma in 1955

In 1956 Moonman became a human relations advisor for the British Institute of Management (BIM)[5] – an organisation put together by a group of powerful British businessmen during the end of the Second World War. Whilst at the BIM Moonman became involved in local politics and served as leader of Stepney Council in East London from 1958 till 1962. In 1959 he was made a Fellow of BIM.[6] That year he also stood in his first parliamentary election, unsuccessfully contesting the constituency of Chigwell for the first time.[7]

In his penultimate year at the British Institute of Management, Moonman published The Manager and the Organisation (1961) a managerial handbook described by the journal International Socialism as ‘an unfortunate hotch potch’ with ‘no sociological value at all’.[8]

Moonman left the Institute of Management in 1962 and became a Senior Lecturer in Industrial Relations at SW Essex Technical College. In 1964 he left Essex to join the Institute of Science and Technology at the University of Manchester.[9] He was a Senior Research Fellow in Management Sciences there until 1966.[10] He was awarded a Masters by the University of Manchester in 1967.[11]

Moonman left the British Institute of Management in 1962 and in 1963 he became a member of the Tower Hamlets Council. In 1964 he contested the constituency of Chigwell for the second time, again without success, but was elected as Labour MP for Billericay in the 1966 general election. From 1967–68 he was parliamentary private secretary to the Secretary of State for Education and Science. In this role he worked with the influential Fabian Anthony Crosland who led the right-wing of the Labour Party at that time. At this time was also a parliamentary private secretary to George Thomson (who was Minister Without Portfolio at that time), who like Moonman later also joined the Social Democratic Party.

By 1968 Moonman had become chairman of the Parliamentary Labour Party’s committee on science and technology as well as a governor of Imperial College, London.[12]

In the 1970 General Election Moonman lost his seat but was elected MP for Basildon at the February 1974 election when the Labour Party returned to power. He lost his seat again at the 1979 general election and in the 1980s he joined the Social Democratic Party.

After leaving Parliament Moonman became involved in health policy and was chairman of Islington Health Authority 1980-90.[13] He created controversy within the Labour Party because of his support for privatisation within the NHS. He was able to win a vote in favour of privitisation by reintroducing the matter on a much-criticised pretext at a meeting at which his supporters were in the majority.[14] In 1987 at the Annual conference of the Social Democratic Party, Moonman arged for a greater role for the private sector. According to BBC Archives: 'Eric MOONMAN, Islington, must look at alternative funding for the NHS & consider working with private sector'.[15]

In 1972 Moonman was at the World Jewish Congress in Switzerland. He approached Stephen Roth, who was then director of the European Jewish Congress, and told him that changes had to be made in the way that Israel and the Jews represented themselves abroad. Roth accordingly gave him permission to start up a commission on Israel. In 1974, Moonman convened the first gathering of Jewish professionals to work out propaganda strategies.[18]

In 1981 a broadcast by the Israeli Radio Peace and Progress (summarised by the BBC) referred to Moonman as one of several “leaders of the Zionist organizations in Britain”; although it is not clear if this referred to the West European Public Relations Group for Information on Behalf of Israel or another organisation. The broadcast reported that Moonman had “explained his [opposition to Menachem Begin] in an article in the Jewish Chronicle, wherein Moonman argued that: “We must support Israel, but we must give consideration to the image of the Israel which we support. It is clear that Israel's Western allies are less and less interested in supporting Begin's Israel.”[21]

In 1985 Moonman forced the editor of the Jewish Quarterly to resign. According to his successor Colin Shindler: “The offence had been caused by a Jewish Quarterly editorial which questioned the actual dangers of anti-Semitism today as popularly viewed by Jewish leadership.”[22]

A 1986 report in The Guardian refers to Moonman as ‘chairman of the research committee of the Board of Deputies of British Jews’,[23] and Moonman’s profile in Debrett's People of Today states that that year he was appointed senior vice-president.[24] At this stage Moonman was also a board member of the British-Israel Public Affairs Committee (BIPAC) where he worked on a publication called EEC Monitor. In 1987 however he was forced to resign from BIPAC after a financial scandal which he considered the result of a campaign against him. Below is an extract from The Guardian explaining the circumstances of Moonman’s departure from BIPAC:

An unusual advert has just appeared in the Jewish Chronicle, asking anyone who knows about a campaign of malice against the former Labour MP Eric Moonman to send the information to a box number. It has been placed, of course, by Moonman himself, who is senior vice-president of the Board of Deputies of British Jews, and chairman of the Islington Area Health Authority in London. Until recently he was also a board member of the British-Israel Public Affairs Committee (BIPAC), but he resigned at the last meeting following what might be called the Alexander Keddie Affair. Keddie doesn't actually exist, although he was

once described as a recluse in Essex who didn't like taking phone calls; the name was simply used over a period of about four years to steer payments to a variety of people, including Moonman, who worked on a BIPAC publication called EEC Monitor. An accountant's report into the affair was prompted by Monty Sumary, a prominent Jewish businessman and fundraiser, and it concluded that Moonman had left people confused about the Keddie arrangement. Moonman denies this, and is now intent on unmasking his putative tormentors. 'I do think there is a campaign against me,' he said this week. 'There have been anonymous letters

By 2001 Moonman had joined the Zionist Federation of Great Britain and Ireland. In mid January 2002 the New Statesman reported that he headed the Zionist Federation’s Media Response Unit; organising email and letter writing campaigns against journalists perceived to be anti-Semitic or critical of Israel.[26] A week after the publishing of that article, Moonman had reportedly become President of the organisation.[27] 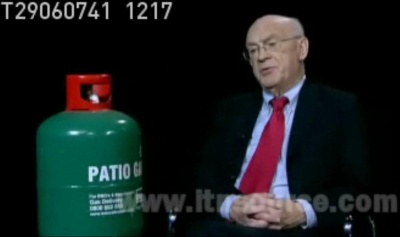 Moonman’s emergence as a terrorism expert seems to have stemmed from his involvement in an organisation called the Centre for Contemporary Studies, a think-tank which published material on football hooliganism and race relations, as well as terrorism. The Centre appears to have been founded by Moonman who seems to have been affected by the Brixton riots and anxious about the possibility of societal breakdown.

In May 1981 the centre published a report 'The Nazi's are in the Playground' According to BBC Nationwide it 'claims extreme right-wing groups are recruiting school children & authorities are unable to control the situation.' The BBC interviewed Moonman on this on Nationwide. BBC archive records state that he 'discusses young racism increasing 50% in 2 yrs; subtle strategies used; importance of process for future of N.F; accuses N.U.T of indifference, and gives Centre's proposals.[28] Later in 1981 a further report on the role of neo-fascist groups in music led to an interview with Joan Bakewell on Newsnight. According to BBC archives Moonman 'welcomes declaration by group "Madness" that they have nothing to do with National Front & British Movement; extreme right see concerts as a potential market for their magazines.[29]

In writings he focused in particular on the influence of media and television. He published a report in October 1981 on the riots that summer called Copycat Hooligans which argued that: “Youths imitated television film of violence in Northern Ireland when they rioted in more than 20 British cities last summer…Eric Moonman, the centre's director and author of the report entitled Copy Cat Hooligans, said the rioters knew what to do because they had seen it on television.[30]

In 1987 Moonman published a book called The Violent Society which included contributions from prominent terrorologists Paul Wilkinson and Richard Clutterbuck. Paul Wilkinson was identified in the contributors notes as a member of the Advisory Board of the Centre for Contemporary Studies. [31] Insight, the Alumni magazine for Liverpool University, wrote that The Violent Society ‘was well received and, surprisingly for Eric, marked another chapter in his life’. The article states that after the publication of The Violent Society Moonman ‘began to take on consultancy work for ITN as an expert in counter-terrorism’.[32] 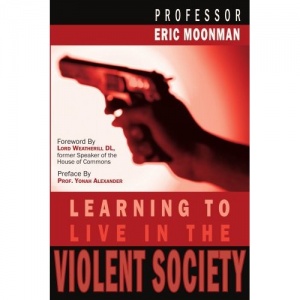 In fact Moonman’s media presence as a terrorism expert does not seem to have taken off for another 15 years. The television archive [33] contains only one item in the 1990s listing Moonman as a terrorism expert and the note does not contain an exact date. With the exception of that item, Moonman's first appearance seems to have been on a Channel Five Lunchtime Bulletin on 18 July 2002, after which he appeared dozens of times on UK television.

At some point after September 11th Moonman was appointed as a member of the Advsiory Board of the Centre for Counter Terrorism Studies at the Potomac Institute for Policy Studies.[34] 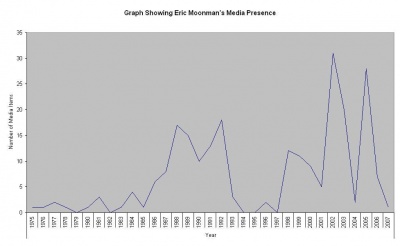 The graph on the right shows Moonman’s presence in the English print media up from 1975 until the end of 2007. The figures were compiled by searching All English Language News at Lexis-Nexis.[35] The results seem to suggest that Moonman was at his most influential - at least with the media - during his time at the Board of Deputies of British Jews and the Zionist Federation of Great Britain and Ireland.

Moonman's profile on British television has also been notable. We tracked appearances by Terrorism Experts on UK Television between 1 January 2000 and 31 December 2006.[36]. Of the 435 'experts' we tracked Moonman was the seventh equal most cited on British TV, appearing a total of Thirty eight times.[37] Moonman mainly appeared on ITN[38] (36 times) with only two appearances on the BBC.

Moonman has been married twice and has two sons Daniel (born 10 July 1966) and Joshua (born 27 January 1972). It was probably at BIM that Moonman met his first wife Jane. She worked with Moonman at the British Institute of Management where she was research and information officer. Like Eric Moonman she later became involved in Zionist organisations. She edited the 1980 edition of The Zionist Yearbook, published by the Zionist Federation of Great Britain and Ireland and was affiliated with the British-Israel Public Affairs Committee (BIPAC) from at least November 1986,[39] and is reported to have been its Director in 1990.[40]

She divorced Moonman in 1991[41] and married Israel’s former ambassador to the UK Yoav Biran. She moved with her new husband to Jerusalem and was appointed as the Jerusalem Foundation's liaison with Britain.[42]

In February 2000 Moonman met City University alumna Gillian Mayer who gave a vote of thanks after a speech he gave in his home town of Southport. They married on 11 February 2001.