"His battles were over ideas and his weapons were the tools to convince, not kill. His influence with Asians came more from his preference to listen to them than from a compulsion to tell them, an unfortunately rare attribute among the other Americans they knew. He was more interested in their songs and stories than in their armaments and believed the people's rich traditions and history were more important than their military's stockpiles in the long run."
(Former CIA director William E. Colby on Lansdale)[1] 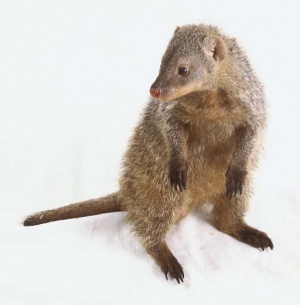 Edward G. Lansdale, was an Air Force officer whose influential theories of counterinsurgent warfare were developed in the Philippines after World War II and again in South Vietnam.

Lansdale is rumoured to have inspired characters in two novels involving guerrilla warfare: the prototype for novelist Graham Greene's character Alden Pyle in The Quiet American (1955), and the inspiration for William Lederer and Eugene Burdick's The Ugly American (1958), as well as these works' subsequent Hollywood film adaptations.although the accuracy of this is disputed.

Lansdale acted as an adviser in the newly independent Philippines in the late 1940's and early 1950's and was an influence in operations by the Philippine leader Ramon Magsaysay against the Communist-dominated Hukbalahap rebellion. John Ranelagh's (1987) 'The Agency'[2]states that in 1950-53 Lansdale was on loan to the CIA from the Airforce when advising Ramon Magsaysay as part of the major long-term project of keeping Communists from power in the far east and take over the old empires in Southeast Asia rather than ally itself with the nascent nationalist and independence movements identified by CIA analists previously: this also represented a shift away from Europe.[3] Here he was working in the Office of Policy Co-ordination (OPC) itself set up in 1948 as a result of National Security Council directive 10/2 whereby the newly formed CIA could engage in "covert operations" in such a manner that:

Specifically, such operations shall include any covert activities related to: propaganda, political action; economic warfare; preventive direct action, including sabotage, anti-sabotage, demolition; escape and evasion and evacuation measures; subversion against hostile states or groups including assistance to underground resistance movements, guerrillas and refugee liberation groups; support of indigenous and anti-communist elements in threatened countries of the free world; deceptive plans and operations; and all activities compatible with this directive necessary to accomplish the foregoing. Such operations shall not include: armed conflict by recognized military forces, espionage and counterespionage, nor cover and deception for military operations.[4]

According to the New York Times obituary:

It was in the Philippines that General Lansdale framed his basic theory, that Communist revolution was best confronted by democratic revolution. He came to advocate a four-sided campaign, with social, economic and political aspects as well as purely military operations. He put much emphasis on what came to be called civic-action programs to undermine Filipinos' backing for the Huks.

Looking back on what he learned in Asia, he once said: The Communists strive to split the people away from the Government and gain control over a decisive number of the population. The sure defense against this strategy is to have the citizenry and the Government so closely bound together that they are unsplittable. [5]

Lansdale became an adviser to South Vietnamese and United States military leaders, and also to Ambassador Henry Cabot Lodge. The Times obituary argues that he made efforts to generate popular support for the embattled Saigon Government, at a time when the United States military role in Vietnam remained limited, and that this "failed to forestall an escalation of the insurgency to full-scale conventional warfare".

Lansdale was born Feb. 6, 1908, and after university became an advertising executive.

He joined the Army as a captain in 1943 and rose to major by 1947, when he left the Army. During World War II he also served in the Office of Strategic Services. He joined the Air Force as a captain the same year, he went to Vietnam in 1954 as a CIA operative and helped in setting up the South Vietnamese Government of President Ngo Dinh Diem, who was overthrown and killed in a coup in 1963. Lansdale was head of a team of agents that carried out undercover operations against North Vietnam. The team turned in a vivid report of its actions shortly before pulling out of Hanoi in October 1954 after the French defeat at Dien Bien Phu. The team's report, later included among the Pentagon Papers.[7]

Lansdale was posted to the Pentagon in 1956 and there, by some accounts, assisted in the formation of the Special Forces, which had the special patronage of President Kennedy.

He also served as the director of the CIA's undercover operations in Indochina.

In a 1977 book, "In the Midst of Wars: An American's Mission to Southeast Asia,"Lansdale argued that the United States could still prevail in remote third-world nations by exporting "the American way" through a blend of economic aid and efforts at "winning the hearts and the minds of the people."[8]

General Lansdale said that in 1961 he was told by the Kennedy Administration to draft a contingency plan to overthrow President Fidel Castro of Cuba. But he said years later that the idea had not been viable because it depended on recruiting Cuban exiles to generate an uprising in Cuba, and he had not formed that team.

The Mongoose in the Pentagon

Some writers see American Cold War culture and the complex ways in which Lansdale both embodied and helped to shape it in terms of Lansdale as the career military officer and advisor, and Lansdale as Cold War celebrity; a combination which points to the interface of PR and military propaganda and covert operations:

Using the artistic skills he developed in college and his experience in advertising, Lansdale became the ultimate confidence man, "combining American belief systems with the persuasive forces of money and military strength" [...] Lansdale was caught between liberal and warrior values. The career Air Force officer and apparent operative for the Central Intelligence Agency (CIA) empathized with the colonial struggle, and had an anthropologist-like interest in the cultures and history of Southeast Asia. Lansdale sought knowledge of Asian culture through his experiences, and then attempted to use that cultural knowledge to benefit American policy. Simultaneously, Lansdale used illiberal tactics (advertising schemes, propaganda, black operations, rigged elections, counterinsurgency) to put American policy into practice in Southeast Asia. As a result, Lansdale accrued a tremendous amount of power helping the governments of the Philippines and South Vietnam in the 1950s and 1960s. The heads of these two governments, Ramon Magsaysay and Ngo Dinh Diem, respectively, gave Lansdale tremendous latitude to create "layer upon layer of confidence schemes mobilized by the power of publicity" (p. 72) so as to win the hearts and minds of the people in the struggle against the spread of communism. Lansdale assumed that these plans, which met limited success in Vietnam and failed in Cuba, would ensure the success of American-style democracy.[9]

In a sense this mythology links back to the 'The Quiet American' and 'The Ugly American' duality. Nashel (quoted above) contends that Lansdale hoped he could utilize this celebrity to carry out the "selling" of South Vietnam to the Americans and includes a verbatim transcript of a March 1956 letter from Lansdale to Joseph Mankiewicz (the director of the 1958 film version of The Quiet American) that suggested screenplay changes to make Vietnam a much more attractive locale and to place the communists in a more negative light, thereby "transforming the ideological purposes of a novel whose politics and tone he despised into a film he could enjoy."

Daniel Ellsberg the author of 'The Pentagon Papers' served with Lansdale in the mid to late 1960s as a member of Lansdale's senior liaison office of elite intelligence agents and with with Henry Kissinger —his former teacher:

When not engaged in typical RD Program "Civil Affairs" activities, such as helping the local Vietnamese build perimeter defenses around their villages, Ellsberg and his fellow RD advisors, under the tutelage of Lansdale, dressed in black pajamas and reportedly slipped into enemy areas at midnight to "snatch and snuff" the local Viet Cong cadre, sometimes making it appear as if the VC themselves had done the dirty deed, in what Lansdale euphemistically called "black propaganda" activities.[10]

Ellsberg disconcerted government officials by organizing a group of five associates to write a letter to the New York Times and the Washington Post denouncing the war.

He began to see not only himself but everyone who did not demonstrated actively against the war as a "war criminal." He seemed obsessed, and his friends found it impossible to get him to talk of other topics; many were put off when he called them "good Germans" for not protesting against the war.[11]

This "act of conscience" helped turn public opinion against the Vietnam War, and inadvertently contributed to the demise of President Richard Nixon, when CIA officer E. Howard Hunt, and former FBI agent G. Gordon Liddy, went to burgle confidential files from Ellsberg's psychiatrist's office, and instead opened up the can of worms of the CIA inspired dirty tricks the Republican Party relied upon to wage political warfare.

Lansdale's (1962)"Operation Mongoose: Program Review by the Chief of Operations," prepared for the U.S., Department of State, which was once secret is now online.[12]