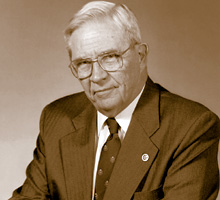 Donald Ainslie Henderson is an American physician and epidemiologist who has written numerous articles on bio-terrorism and other public health issues. He is the founding director of the Center for Civilian Biodefense Studies at Johns Hopkins University and has served in several advisory roles in the US Government.

From 1966 to 1977 Henderson led the World Health Organization's global smallpox eradication campaign. From 1977 through August 1990, He was dean of the Johns Hopkins School of Public Health. From 1991-1995 he worked in the US Government initially as associate director, Office of Science and Technology Policy, Executive Office of the President (1991-1993), and later as deputy assistant secretary and senior science advisor in the Department of Health and Human Services. He rejoined the Hopkins faculty in June 1995 and in October 2001, Tommy G. Thompson, Secretary of Health and Human Services, appointed him chair of a new national advisory council on public health dealing with preparations for bioterrorist attacks.[2]

Henderson is a member of the editorial board for the peer-reviewed journal, Biosecurity and Bioterrorism: Biodefense Strategy, Practice, and Science. He has authored more than 200 articles and scientific papers, 31 book chapters, and is coauthor of Smallpox and Its Eradication, the authoritative history of the disease.[4]