Difference between revisions of "David Frum" 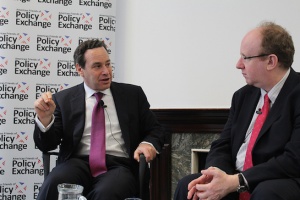 David Frum (born 30 June 1960, Toronto) is a Canadian American neoconservative who, while serving as Bush's speech writer, is reputed to have inspired the phrase "Axis of Evil" (Frum's original suggestion "Axis of Hatred" was christianized by lead speechwriter Michael Gerson). A longtime member of the American Enterprise Institute, he went on to found FrumForum after being fired from the neoconservative thinktank. In the leadup to the Iraq war, he called for the expulsion of antiwar voices from the conservative movement.[1] He is married to Danielle Crittenden, stepdaughter of the rightwing former Toronto Sun editor Peter Worthington. Both are contributors to FrumForum.[2]

They began by hating the neoconservatives. They came to hate their party and this president. They have finished by hating their country.

War is a great clarifier. It forces people to take sides. The paleoconservatives have chosen — and the rest of us must choose too. In a time of danger, they have turned their backs on their country. Now we turn our backs on them.[1]

David Frum is senior editor at The Atlantic and the author of eight books, most recently the e-book Why Romney Lost And What The GOP Can Do About It (published on the Thursday after the 2012 Presidential election); one of its key contentions is that the Republican Party drifted from its historic base in the American middle-classes and subscribed instead to an ideology that was off-putting to large numbers of people. His most recent lengthy article entitled, 'Why the GOP must modernise to win', appeared in this month’s version of influential magazine, Foreign Affairs. David has also served as a Presidential speechwriter and divides his time between Washington, DC, and Toronto, Canada, the home of his family’s company, the Frum Development Group.[3]