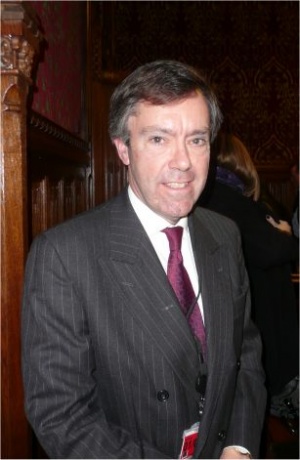 David French is the Director of the Westminster Foundation for Democracy and was previously Chairman of the Commonwealth Institute. He is a member of a range of elite networking organisations including The Round Table. He has been a consultant to the BT Forum and an associate of Compass Partnership, a consulting practice which specialises in the not for profit sector.[1]

He was a trustee of the Family Policy Studies Centre at Oxford University[2] and was involved with the establishment of a new charity, the Twenty First Century Foundation. He undertook the General Management Course at WPP Group's Henley [3] from May to July 1984 and the Cabinet Office Top Management Programme in June-July 1995. [4]

French attended the elite private school Sherborne followed by a degree in Politics, Sociology and Psychology at Durham University. he began his career 'in the brewing industry' and then 'joined the National Council of Social Services (now NCVO) in 1971. In 1974 he was appointed Head of the Social Services Department of the Royal National Institute for the Deaf and in 1978 joined The Children's Society where he was Director of Services until 1987. From 1993-95 he was a Council member of the UK Association of the International Year for the Family and from 1985-87 Chairman of St. Albans International Organ Festival.'[5]

He undertook the General Management Course at Henley from May to July 1984 and the Cabinet Office Top Management Programme in June-July 1995.

From 1987 to 1995 he was Chief Executive of Relate and took that organisation through its name change from the National Marriage Guidance Council and relaunch in 1988 and the subsequent transformation of its image and profile. During his time the volume of Relate's work doubled and it also became a leading contributor to public policy and debate in its field, notably in the controversial area of divorce law reform.

Since leaving Relate in September 1995, David French has worked as an independent consultant in policy and management. He convened the Family Law Bill Coalition last year, a grouping of some 15 organisations supporting the main provisions of that Bill. He has been a consultant to the BT Forum and an associate of Compass Partnership, a consulting practice which specialises in the not for profit sector. He has been a trustee of the Family Policy Studies Centre since 1989 and is involved with the establishment of a new charity, the Twenty First Century Foundation.[6]

The Commonwealth Institute was an agency of the British Government [7], Governed by individuals such as Algy Cluff [8] who has been Chairman and Chief Executive of Cluff Mining since 1996, having founded Cluff Oil (subsequently Cluff Resources) in 1971. Cluff was also Chairman (and former Proprietor) of The Spectator, a Trustee of the Anglo-Hong Kong Trust, and a Director of the Centre for Policy Studies.[9]

French is also part of The Round Table and was on the editorial board of The Commonwealth Journal of International Affairs — which is comprised of mostly diplomats. The organisation now begrudgingly acknowledges the critical interpretation of the Round Table which can be found in Carroll Quigley’s writing on The Anglo-American Establishment and what he terms 'finance capital'. [12] The Round Table is thought of a the fore-runner of the Royal Institute of International Affairs, The Bilderberg Group and Council on Foreign Relations.[13]

The Westminster Foundation for Democracy (WFD) and Commonwealth Institute (CI) were similar organisations, [14] operating with much the same budget with a cross-over of people. The CI is involved in "Representing the Commonwealth to the British public; mounting exhibitions and maintaining collections; and providing educational programmes, library and information services, and operating a major conference and events centre;" while the WFD's terms of reference are: "To assist the development of pluralist democratic institutions overseas. Priority regions are Central/Eastern Europe, the former Soviet Union and anglophone Africa."

Former senior diplomat, Robert Alston took over French's role in representing CI in its international relationships.[15] Alston was Assistant Under Secretary of State at the Foreign and Commonwealth Office, and has worked in Kabul (1963), Tehran (1974) and head of the Joint Nuclear Unit at the FCO (1978), Political Counsellor to the UK delegation to NATO (1981) Head of the Defence Dept., (1984) and Ambassador to Oman (1986-90).

Judith Hanratty, is the 'Chairman' of the Commonwealth Institute, she is also a member of the Council of Lloyd’s of London, Non-executive Director of Partnerships UK plc, Charles Taylor Consulting plc and the British Standards Institution, a former Company Secretary and Counsel to the Board of BP p.l.c., Member of the Competition Commission, the Takeover Panel and the Listing Authority Advisory Committee to the Financial Services Authority.[16] [17]