Difference between revisions of "Charlie Beckett" 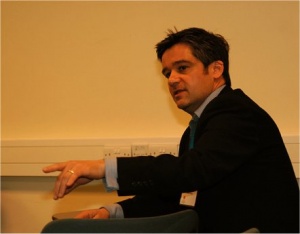 Charlie Beckett is the founding director of Polis (since 1 June 2006), a "new journalism and society think-tank" attached to the LSE and the London College of Communications (part of the University of the Arts). He is a Senior Editor for Channel Four News, and has spent the past 20 years "working for some of the best news and current affairs programmes at the BBC, LWT and ITN." [1]

He raises 'perfectly valid' arguments about aid and the pro market view on climate rather than any other. Unsurprisingly Beckett goes on to name check Tony Blair's, 12 June 2007 'feral beasts' speech, and mention that it was delivered at the at the Reuters Institute for the Study of Journalism, at which John Lloyd. Perhaps more surprisingly to the uninitiated is that he mentions, his 'former colleague' media academic Roger Silverstone: