Difference between revisions of "Bruce Hoffman" 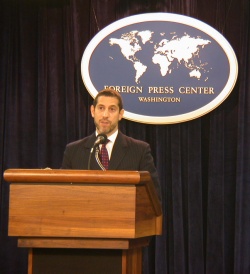 On 12 July 2006 it was announced that Hoffman would join Georgetown University's Edmund A. Walsh School of Foreign Service[7] where he is currently professor in the Security Studies Program. Note that the SFS program at Georgetown Univ. is a prime recruiting ground for CIA and other intelligence operatives. The CIA recruits openly, and some students wear CIA t-shirts. At least two SFS deans were "former" CIA officers (e.g., Dean Keogh).[8]