In the context of the debate surrounding the Labour Party’s defence policy and membership of NATO, Stuart Croft states that in 1984 the BAC published 'Diminishing the Nuclear Threat', a report written by a number of 'distinguished former military officers' who argued that the notion of controlled escalation enshrined in flexible response was impractical. These he characterizes as "a group of analysts who may perhaps best be termed disenchanted orthodox thinkers, people who shared many of the orthodox assumptions and yet agreed with the alternative thinkers on this issue". This also touches on the 'special relationship;[7]

The first episode of Duncan Campbell's[8] BBC documentary series 'Secret Society'(1987) called 'The Secret Constitution' offered a critique on covert groups and committees within the UK government, explored the secret decision to buy U.S. Trident nuclear submarines and the cabinet level dirty tricks campaign against CND and this included criticisms of the BAC, and the Coalition for Peace Through Security for keeping key decisions secret from MPs. It was banned by the BBC, although the programme on the 'Zircon' spy satellite tend to be the focus of reporting on the affair.[9]

The British Atlantic Committee became the Atlantic Council of the UK and is part of a nexus of 'Atlanticist' organisations which bring together the USA's, the UK's and European military-industrial-complexes although we can also add a political dimension to that. Some historical indication of their deliberations can be gained from the the European-Atlantic Group website[10]

Historian Hugh Wilford notes that the BAC was one of a number of Atlanticist groups of the early 1950s with Labour Party links, but that these connections were not universally welcomed inside the Labour movement:[11]

The flurry of Atlanticist organisational activity which occured in 1952 and 1953 was partly a response to growth of a new concern for the 'anti-anti-Americans', namely Bevanism.Although Anuerin Bevan and his followers frequently deined that they were anti-American, their repeated questioning of the Atlantic alliance struck many observers as posing a serious threat to American interests.[12]

A former secretary of the right-wing Labour Manifesto group (most of whose members defected to the Social Democratic party in 1981), Robertson joined the government-funded British Atlantic Committee in the same year that it was publicly attacking the Labour party's non-nuclear defence policy. He was on the Council of the Royal Institute for International Affairs (Chatham House) from 1984 to 1991 and on the steering committee of the annual Konigswinter conference for much of that time. He has been a governor of the Ditchley Foundation since 1989 and was vice-chairman of the Westminster Foundation for Democracy from 1992 to 1994.[13] 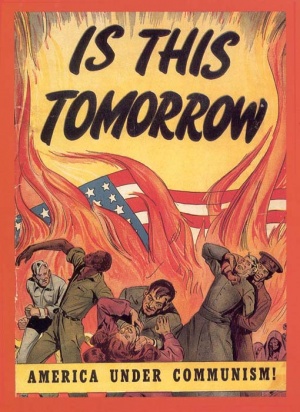