For the purposes of the Undercover Policing Inquiry and Operation Herne he is designated by the cipher 'HN321' / 'N321'; the Inquiry has ruled that the officer's real name will be restricted.[1]

Note from Undercover Research Group: if anyone recalls 'Bill Lewis' from his time in the Vietnam Solidarity Campaign please get in touch. We appreciate that these events took place 50 years ago, so welcome corrections on how we have portrayed the history of the organisations mentioned.

According to his risk assessment:[2]

The Vietnam Solidarity Campaign was a broad-church alliance across the left, it was firmly embedded in a Trotskyist milieu.[3] Though relatively small in comparison to other such groups, the International Marxist Group was an influential organisation within this milieu and was instrumental in founding the VSC. Many of its leading members played leading roles in the VSC, both publicly and behind the scenes, at the time of Bill Lewis's infiltration. In particular, Tariq Ali, a figurehead of the 1968 demonstrations, was an IMG member.

As yet it has not been possible to identify specifics with regards his infiltration within these two groups. 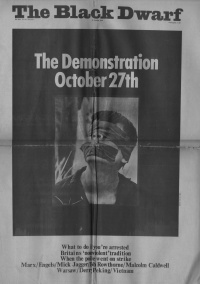 Though small, the IMG is noted as a highly dynamic organisation, which played an active role in political campaigns of the day, particularly the Vietnam Solidarity Campaign. For a while in 1967/68, the VSC shared the office space of the IMG on Toynbee Street, London.

The IMG also backed other international solidarity campaigns, such as those with Cuba and South Africa. At the time of Bill Lewis' interest in the organisation, its members were prominent in the Russell / International War Crimes Tribunal, Revolutionary Socialist Students Federation and the Institute for Workers' Control. It also had close ties with the influential New Left Review.[4][5][6]

As a group, the IMG was a 'cadre' organisation, which had high requirements of its membership. One did not simply sign up, but first had to become a "candidate member". Before progressing to full membership, the candidate was expected to have undergone education and to show appropriate commitment.

It appears that in 1968 there was only one branch in London. However, it organised discussion groups and reading circles, which were open to any to attend, as well as numerous front groups working on a grassroots level. It is likely that 'Bill Lewis' would have associated himself to one of these outer circles organised by IMG in London.[7][8][9][10]

The Vietnam Solidarity Campaign (VSC), which opposed the United States' role in the Vietnam War, was founded in 1966 by members of the International Marxists Group, working in conjunction with the Bertrand Russell Peace Foundation. They were subsequently joined by activists from the International Socialists, another Trotskyist faction (later known as the Socialist Workers Party, and subsequently targeted by undercover police in its own right) as well as Maoists and anarchists.[11]

Though created and led by Trotskyists, the VSC attracted a broad following from across the political left-wing and was particularly successful in linking up with the prominent radical student movement of 1967 to 1969, as well as peace / anti-nuclear campaigners.[12][13] As an organisation, it was loosely structured as a whole, often working through 'ad hoc committees', which co-ordinated local branches and their activities in given areas. It did however have a national committee which set national strategy. The campaign declined rapidly in 1969, and in October that year, the coalition effectively disintegrated over political differences in relation to the Vietnamese leader, Ho Chi Minh.[14]

In terms of its activities, the VSC is most notable for organising several mass demonstrations against the war, particularly in 1967 and 1968 which attracted up to 100,000 protestors at a time.[15] One such demonstration was the protest of 17th March 1968, which saw the now infamous 'Grosvenor Square riots' take place, when a segment of the marchers sought to occupy the US embassy leading to clashes with police.[16] This caused huge political embarrassment to the UK Labour Government under Harold Wilson, and as a consequence lead to the creation of the Special Demonstration Squad with the Metropolitan Police Special Branch.

However, even prior to the founding of the SDS, police files from the time show the campaign was actively monitored, including the Metropolitan Police Special Branch requesting information from other forces and compiling reports on its plans and protests. In particular, a number of documents indicate their considerable interest in the VSC's "Autumn Offensive" - the name for the large scale demonstration of 27th October 1968.[17] Much of this work was overseen by Det. Ch. Insp. Conrad Dixon who had responsibility for monitoring Trotskyists and anarchists on behalf of Special Branch at the time.[18] It was also Dixon who in September 1968 founded the undercover unit, later known as the Special Demonstration Squad, which deployed HN321 as 'Bill Lewis' into the VSC. 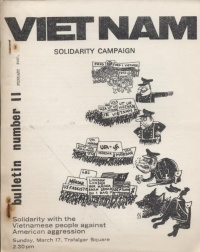 Cover of Issue 11 of the Vietnam Solidarity Campaign Bulletin, February 1968.

According to the August 2017 'minded-to' note of UCPI chair John Mitting:[19]

HN321 is now in his 70s. He was deployed against two groups which no longer exist, for one year, between September 1968 and September 1969. There is not and has never been any known allegation of misconduct against him.

While the open version of a document prepared by the Metropolitan Police (for the Undercover Policing Inquiry) stated:[20]

N321 received no training and no pyschometric testing. N321 was told that N321 needed to gather intelligence, but the senior officers left it to the squad members to work out their own approach. There was no particular methodology advocated by officers and N321 simply used whatever techniques looked the most promising. To a certain extend the approach had to be tailored to the group that were to be penetrated. (para. 3.3)
He did not use the identity of a dead child. (para 4.4)

The dates of the infiltration make it very likely he was among the first group of undercovers deployed by the nascent SDS.

HN321 was deployed as a member of the Special Operations Squad in 1968 – 1969. He had the cover name “William Paul Lewis”, although he has said that he was known simply as “Bill”. He may have been encountered by individuals involved with the International Marxist Group or the Vietnam Solidarity Campaign in London at that time.

We have not yet ascertained the nature of the interaction the undercover had with his target groups, so it is not possible at this stage to provide an indication of the extent to which he gained knowledge of their internal working and operations or became close to leading members.

He stated to the risk assessor that:[20]

I believe that at all times I acted faithfully, professionally and in accordance with my instructions from senior officers. I did nothing dishonourable, other than to maintain the necessary subterfuge of a secret identify. (para. 14.1)

HN321 is not a core participant in the Undercover Policing Inquiry; his interests there are represented by the Metropolitan Police Service's Designated Lawyers Team.

HN321 was among the first tranche of officers to be considered for restriction orders by the Undercover Policing Inquiry.[22] As such, the Metropolitan Police applied for a restriction order on both his cover and real names.[23] This was supported by a personal statement by HN321,[24] supplementary submissions[25] and a MPS risk assessment.[20][26]

The Inquiry chair, John Mitting, issued a 'Minded-To' note on 5 August 2017, in which he indicated that he was considering releasing the cover name but restrict the undercover officer's real name, stating:[19]

[HN321] undertook the role of an undercover officer on the understanding that his identity would be kept secret. He is concerned about possible media interest if his real identity were to be revealed. He is, in particular, concerned about the impact on his wife, also in her 70s. His concerns are not irrational. In the unlikely event that disclosure of his cover name, which can be made, prompts evidence from one or more members of the target groups it will not be enhanced by disclosure of his real name. It is likely that disclosure of his real name would prompt intense and unwelcome media interest in him and so would give rise to serious interference with his and his family’s right to respect for their private life under Article 8 of the European Convention which would not be justifiable under Article 8(2). Closed reasons accompany this note.

The Special Branch was a covert entity and while the public knew it existed, its activities were secret. My understanding when I joined the Special Branch was that I was not to discuss its activities outside of the service and my expectation of the Branch was that my identity would also be kept secret. I recall that at the Induction presentation into the Branch that we were warned that we would have access to secret information that we were not to reveal to anyone outside of the Police or to even acknowledge that we were members of the Special Branch. This seemed entirely reasonable to me and for nearly fifty years I have kept faith with that understanding.

My greatest concern is for the welfare of my family if my identity details are revealed during the Inquiry... I do not believe that [my partner] will cope well with the stress caused by possible media intrusion... My only concern is that with the publication of my name and details, I will be subject to intense media scrutiny. I can imagine the delight of the local media. The result will be reporters, cameras, and other media camped on my doorstep demanding that I give them an interview, preferably an exclusive, or comment which they can publish. It is also likely that it will affect my employment.

There is no risk from the [group(s)] N321 infiltrated. N321 considers that most of the people N321 was closest to will no longer present a risk. I have not identified any individual who I think would provide an ongoing physical risk to N321 or N321's family. (para. 16.1)

The application to restrict his real name was heard at the hearing of 21 November. There it was noted that HN321 currently lives outside of the UK and had said they would not return if their real identity was revealed, but is prepared to cooperate with the Inquiry if it wasn't. It was said that he believed he had done nothing wrong during his time undercover, and Mitting took the view the value of HN321's evidence would only go towards the founding of the SDS.[27] Mitting ruled on 5 December 2017 that 'if the Inquiry is receive anything of value from HN321, it must not publish his real name', and granted the restriction order over the officer's real name.[28] The Restriction Order was published on 8 December 2017.

John Waldron, Commissioner of the Metropolitan Police. Deputy Commissioner, he acceded on the sudden death of his predecessor Joseph Simpson on 20 March 1968.[29]

Special Branch reports from 1968, authored by Conrad Dixon and under the authority of Ch. Supt. A. Cunningham, were regularly submitted to one J. M. Clift of F.4 Division in the Home Office.[17] In later years, F.4 is listed as having responsibility for overseeing counter-terrorism and related matters.