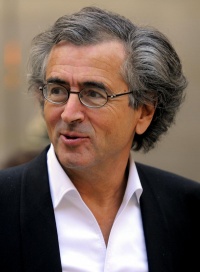 Bernard-Henri Lévy's attachment to Israel animates much of his anti-Muslim politics. He is an uncritical supporter. Shortly after Israel's assault on Gaza which left more than 1,400, a third of them children, dead, Levy wrote a long piece portraying Israel as the victim.[1] He rejected the criticisms levelled against Israel in the Goldstone report, adding:

According to Bernard-Henri Lévy 'the veil is an invitation to rape'. Laila Lalami observes:

It is interesting, too, that Lévy demands for himself that which he is not willing to give others. In 2004 he hired the designer Andrée Putman to renovate his vacation home in Tangier. The home lies next to the famous Café Hafa, whose regulars once included Paul Bowles, Tennessee Williams and Jean Genet, and which has unparalleled views of the Mediterranean. Patrons of the cafe can no longer enjoy an unobstructed view, however, because during the renovations Lévy constructed a wall around his terrace, where his wife, the actress and singer Arielle Dombasle, likes to sunbathe. Lévy reportedly wanted to protect her from the eyes of the men at the Café Hafa. Unveiling only goes one way, it seems.[3]