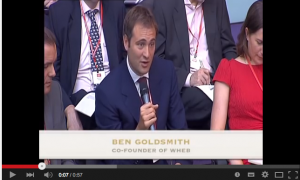 Ben Goldsmith is the founder of environmental investment firm WHEB.

He is the brother of Conservative MP Zac Goldsmith and son of Sir James Goldsmith.

He has donated money to both the Conservative Party and the Green Party.

In 2002, Goldsmith founded WHEB, a green investment firm which focuses on 'opportunities created by the global transition to more sustainable, resource efficient and energy efficient economies'. At WHEB he takes the lead on marketing, distribution and strategy.[1][2]

As well as being a partner at WHEB, Ben is the chair of this family's philanthropic foundation, JMG Foundation. He played a key part in setting up the Environmental Funders Network, 'which brings together 150 trusts, foundations and individuals donors.[3]

In the midst of the 2015 Swiss HSBC tax avoidance debacle, it was revealed that Ben, like his brother Zac, held accounts with the bank's Swiss subsidiary. The brothers inherited French nationality and non-domicile status from their father Sir James Goldsmith, and the bank was used to 'distribute a tax sheltered offshore fortune to around 15 family members'. The money has reportedly since been invested by the heirs in UK properties and businesses. When asked, Zac said the offshore structure 'was not designed to mitigate taxation but rather to preserve the assets for future generations'. Ben Goldsmith declined to comment further.[4]