The Social Affairs Unit was founded as a charity in 1980 by Julius Gould and Digby Anderson with active encouragement from the Institute of Economic Affairs. Its early publications attacked social security and it later developed more of a preoccupation with law and order, social decline and family values.

Social Affairs Unit and the BBC 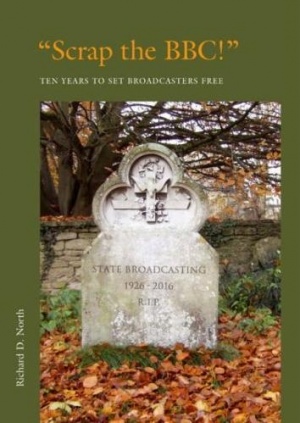 Whilst other right-wing think-tanks like the Institute of Economic Affairs and the Adam Smith Institute heavily criticised the BBC from the beginning of the Thatcher era, the Social Affairs Unit does not appear to have shown much interest in broadcasting until relatively recently. In 2005 it published a 219 page polemic Scrap the BBC!: Ten Years to Set Broadcasters Free.

Scrap the BBC! was written by the right-wing journalist and commentator Richard D North, SAU’s arts reviewer who was also a media fellow at the Institute of Economic Affairs. [1] It featured on its covered a tomb stone with an epitaph reading, ‘STATE BROADCASTING 1926-2015 R.I.P.’.