From Powerbase
Jump to: navigation, search
N.B. This page relates to the IEA’s attacks on the BBC. A separate page deals with the IEA in general. 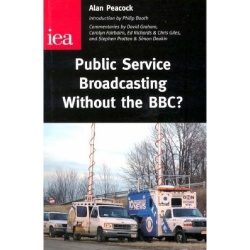 Alan Peacock’s 2004 report for the IEA, Broadcasting Without the BBC?

The Institute of Economic Affairs (IEA) is a seminal free market think-tank based in London. Through its promotion of free market theorists like Milton Friedman it provided an intellectual rationale for business friendly political and economic reforms introduced by the Thatcher government in the UK - a political programme which came to be known as neoliberalism.

IEA and the BBC

Media academic Tom O'Malley notes that, ‘There had been little sustained academic or national political interest in the technicalities of broadcast economics in the UK until the advent of the Thatcher government’, but that, ‘The IEA had published occasional pieces’. [1] These included a report authored by the director of the London School of Economics Sydney Caine. [2]

Figures writing for and closely associated with the IEA had a key role in the attacks on the BBC and public service broadcasting more generally which began in the 1980s. Not least of these was the economist Alan Peacock, who was a Trustee of the IEA and also served as Vice-Chancellor of the University of Buckingham – Britain’s only private university which was closely affiliated with the IEA. Peacock was appointed by the Thatcher government to head the Committee on Financing the BBC, better known as the Peacock Committee.

Another IEA affiliated member of the Peacock Committee was Samuel Brittan, who was appointed to the Committee by his brother, the Home Secretary Leon Brittan. He was ‘closely affiliated with the IEA and had published under the IEA’s imprint.’ [3] Chris Horrie and Steve Clarke note that whilst the committee was conducting its inquiry, Samuel Brittan was close contact with the fellow financial journalist and neoliberal ideologue Peter Jay:

Brittan had developed his theories with Peter Jay, the former economics editor of The Times and presenter of LWT’s Weekend World. Jay was not on the committee, but had strong thought of his own on the future of television. He and Brittan were to spend long sessions together at Jay’s Ealing home, effectively forming their own private committee, and wildly exceeding Peacock’s original brief. [4]

Peacock, Brittan and the other members of the committee were advised by Cento Veljanovski, a member of the IEA who later became its Research Editorial Director. [5] In 1989 Veljanovski edited the IEA book Freedom in Broadcasting (which also happened to be the title of Rupert Murdoch's notorious MacTaggart Lecture that same year). The book included contributions from Samuel Brittan and Alan Peacock. [6]

The Thatcher government was advised on broadcasting by the IEA member and former Panorama producer David Graham, who had written articles on broadcasting for the IEA. According to the authors of The Battle for the BBC, Brian Griffiths, the head of Thatcher’s Policy Unit, invited Graham to Downing Street ‘on several occasions to discuss broadcasting. Griffiths was interested in the economic questions: how the industry was structured; who did what; how people were paid for what they did.’[7] According to the authors of Fuzzy Monsters: Fear and Loathing at the BBC, Griffiths viewed the licence fee as a denial of freedom of choice and therefore a crime against God. [8] David Graham went on to found the television research company David Graham & Associates in 1990 which was renamed Attentional in 2007. [9] He contributed a chapter 'The importance of competition' to the 2005 Institute of Economic Affairs publication Public Service Broadcasting Without the BBC? edited by Alan Peacock.

IEA's chairman Ralph Harris raised around £100,000 for the right-wing Conservative MP Neil Hamilton to bring a libel action against the BBC over the Panorama programme Maggie's Militant Tendency. The programme, which was based on an official investigation by the Conservative Party, detailed infiltration of the Tory party by rightwing extremists. It was broadcast on 30 January 1984 [10] and provoked a furious reaction from the Tory right-wing. Lord Harris has said: 'I remember at the time Neil came to me and raised the question of financing the libel action. I managed to raise around £100,000, enabling Neil at the time to go after the BBC.' [11] A major donor to the fund was the right-wing financier Sir James Goldsmith. [12] The case came to the High Court in October 1986 and the BBC subsequently settled, [13] according to the BBC Director-General Alasdair Milne because he was instructed to by the Governors. It cost the BBC £50,000 in damages and £250,000 in costs after "the governors instructed me to pull out". [14] This was followed by a Commons motion signed by 100 Tory MPs calling on the DG to resign. [15]